Erik (Andreas Wilson) gets expelled when the Prefects, led by Silverhielm (Gustaf Skarsgård), discover a letter from Marja (Linda Zilliacus), and reveal their affair to the Headmaster.  He decides to confront Silverhielm, and when it seems he will give him a good beat -even though Silverheim, cowardly, tries to convince him otherwise-, nothing happens, and Silverheim is just left behind, bawling and deeply humiliated.

Then, Erik calls the lawyer from the beginning of the movie, and, when he arrives, they both enter the Headmaster’s office, while a group is having a toast.  Erik demands the Headmaster for Marja’s letter back, or the situation of perpetual abuse commited against everyone by the Student Council would be exposed to the press and the Police.  The Headmaster, then, complies.

Finally, back at home, Erik and his stepfather confront each other because of Erik’s D in Behavior, and when the stepfather wants to physically abuse him as since the beginning of the film, Erik decides to fight back and announces the heck of a beating he will give to the stepfather, and how he will have to keep his mouth shut about it, or else.  The screen goes black, but we already know what happens.

In the final scene, Erik and his friend Pierre (Henrik Lundström), meet again, comment about going to college, reassure their friendship, and then they part separate ways. 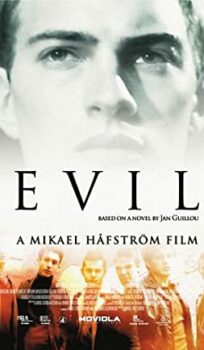