Caleb (Domhnall Gleeson) is selected to spend a week out at the secluded house of reclusive genius and tech CEO, Nathan (Oscar Issac). After arriving by helicopter, Nathan reveals to Caleb that he was selected because he is to take part in an experiment. The experiment is a Turing test on a humanoid artificial intelligence (AI) named Ava (Alicia Vikander). Other than the human skin on her face, hands and feet, she has the body of a robot.

Over the next few days, Ava and Caleb develop a strong bond, which results in Caleb deciding to help Ava escape from Nathan. On the night of the escape, Nathan figures out Caleb’s plan and tells him that she is using him, as he programmed her that way, deeming the experiment a success. When Caleb reveals that his plan is already in motion, Nathan knocks him out and decides to kill Ava. However, Ava kills Nathan first and locks Caleb in a room. She covers herself up with skin from Nathan’s other AIs (who have since been deactivated) and puts on some clothes. She goes out to where the helicopter is to pick up Caleb and is airlifted out into human society. 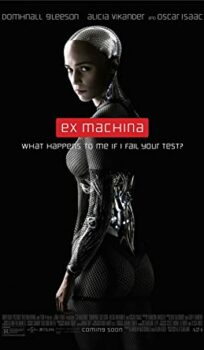