Pooper:
Reign is an alias and she is actually Father Conway’s daughter Devon. Father Conway institutionalized Devon to hide the fact that he had fathered a child while a member of the clergy. Devon called forth the evil spirits in the asylum and ultimately tricks Patrick into killing Father Conway. Patrick and Rory then seemingly kill Devon and burn down the asylum.

Long Ending:
Father Conway (Stephen Lang) is a priest overseeing the renovation of an abandoned asylum where many children were killed by the regressive mental health treatments provided there. A young man named Patrick (Kelly Blatz) is tasked with the clean-up. He is very close to Father Conway, who views Patrick like a son. Patrick’s brother Rory (Michael Ormsby) convinces Patrick to throw a huge party at the asylum before the clean up begins. The party is full of booze and drugs. A few of the party guests end up passing out at the asylum. They include Patrick and Rory, their dorky friend Knowles, couple Amber and Brad, a druggie named Drew, and a girl they met that night named Reign (Brittany Curran).

The next day, Rory becomes possessed. Patrick calls Father Conway for help. Meanwhile, Rory ends up killing a local that drops by the asylum. Amber and Brad try to flee, but end up accidentally running over Father Conway. They drag Conway’s seemingly dead body into the asylum, at which point the electric emergency system activates and locks everyone inside.

The group unsuccessfully tries to perform an exorcism on Rory using instructions from the internet. Eventually, however, the entity jumps from Rory to Amber (who kills Drew). Father Conway’s body disappears. Reign and Patrick find a file of a child named Devon that Father Conway sired and had committed to the asylum. They theorize Devon is the malicious spirit that is possessing the group in search of revenge.Throughout the course of the day, Brad, Amber and Knowles are all killed.

The remaining three finally find the fuse box and deactivate the security system. Rory climbs out the window but a revived Father Conway attacks and kills Reign before she can get out. Patrick confronts Father Conway about his son Devon, but Conway denies ever having had a son. Disgusted by Conway’s lies and his seeming murder of Reign, Patrick kills Conway. A fire also breaks out and begins consuming the asylum.

Reign then recovers from her apparent death. She reveals that she is the one controlling the spirits and that she is actually Devon (Conway hadn’t lied as Devon was his daughter, not his son). She says that her mother committed suicide after Father Conway rejected her and that Conway committed her to the asylum soon afterwards to cover up her parentage. She escaped after learning how to control the spirits of the dead children in the asylum. She then set up all the possessions to get her dad to come to the asylum where she could have her revenge (she manipulated Patrick into killing Conway, knowing that Patrick’s lost faith in Conway would break his heart). She then attacks Patrick but, with Rory’s help (who came back after escaping), they manage to lock Devon in a box that is consumed by the flames. Rory and Patrick leave as the asylum burns down behind them.

There is a post-credits scene where police walk through the remains of the asylum and the box Devon had been locked in is shown to be empty. 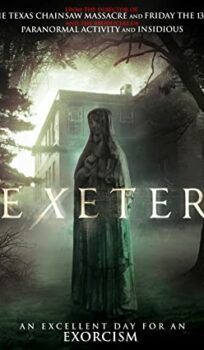