The first follows Ari Ben Canaan (Paul Newman) as he gets a cargo ship and smuggles over 600 Jewish inmates out of the camp of Holoccaust surviors who have no homeland, and sets off for Palestine. When the British discover that the refugees are in a ship in the harbor, they blockade it. The refugees stage a hunger strike and eventually the British relent and allow the Exodus safe passage.

The second part takes place in Israel and deals with the tensions over the partition of Palestine.  Things quickly turn bloody and both Karen and Taha are killed.  As they are buried Ari promises them that one day Arabs and Jews will live together in peace. The movie ends with Ari and Kitty heading off towards the battle as Israel’s neighbours turn on them. 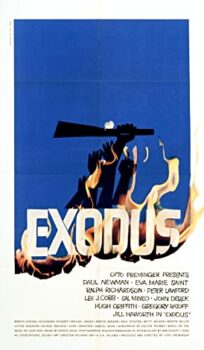