John Crowley (Brendan Fraser) and wife Aileen (Keri Russell) have two children, Megan (Meredith Droeger) and Patrick (Diego Velazquez) out of three who have Pompe disease.  A horrible experience where the child is expected to live on a respirator and in a wheelchair with a life expectancy of 9 years old.  Megan turns 8 in the beginning of the film.

John is desperate for a cure to halt the enlargement of his children’s organs which will cause death.  Dr. Robert Stonewall (Harrison Ford) has a theory which would created a better cure than the current options out there.  John visits Dr. Stonewall to convince him that this theory needs to be practiced and made into medicine.  Dr. Stonewall needs funding as his current university gives more money towards football than his research.

John and Aileen start fundraising and meeting other families who have children with the disease.  They are only able to raise under $100,000 while Dr. Stonewall needed $500,000 to start the project.  When Dr. Stonewall gets the cheque he convinces John to quit his current job and start a company to do the research and development.

John and Dr. Stonewall get some scientist venture capitalists to put up the rest of the money so they can start on their new adventure.  Eventually the venture capitalist get concerned about the money being spent with no tangible results.  John gets a competing drug company who is also working on a cure for Pompe disease to buy out their small company and integrate their small company into the larger one with all staff.

John and family move into a bigger house.  Dr. Stonewall gets a new lab.  Research continues.

In the end, one of the other drugs is used to stop Pompe from killing John’s kids during a sibling trial.  Megan is able to sit up in a car seat since she was a toddler.  Dr. Stonewall’s theory does pan out and he creates his own research company when he cashes a $6 million cheque.  One of the other Pompe stricken families, the Temples, sees their 3 year old daughter walk for the first time by using the cure. 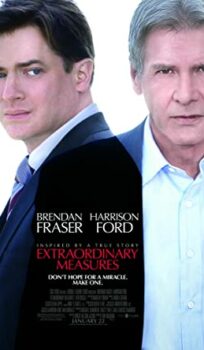