Pooper:
Everyone winds up dead, either killed by the aliens or by the government (or by suicide in Melanie’s case).

Long Version :
April (Brittany Allen) and her boyfriend Kyle (Freddie Stroma) are going to her parents’ cabin for the weekend. April is unhappy to find that Kyle has invited his friends Seth (Jesse Moss), Melanie (Melanie Papalia), and Seth’s girlfriend Lex (Anja Savcic).

As they party at the cabin, something passes directly overhead and crashes in the woods nearby. Driving out to explore, they find a crashed flying saucer! More unnerving, there are clearly non-human footprints leading away from the crash site. They return to the cabin and arm themselves. When the alien shows up, they shoot him in a panic. Unfortunately, the aliens do not react well to this!

The group try to drive to a nearby town for help, but their way is blocked by a large tree. A saucer appears overhead and abducts Lex as the rest flee. Back at the cabin they board up the doors and windows up as best they can. The police show up and arrest Seth after he almost shoots them in a panic. As the cops drive the kids out, an alien appears and uses telepathy to force a cop to kill his partner then himself. Seth runs off into the forest, but is abducted by another alien – in an attempt to stop them he handcuffs himself to a tree, but the alien ship just rips his arm off his body.

The aliens attack the cabin, and Kyle is abducted next. Terrified, Melanie commits suicide with sleeping pill overdose.

April sees that the alien ship is leaving. Upset at losing Kyle, she sets off some fireworks in an attempt to gain the alien’s attention. It works, and she is abducted too.

They wake in a field and walk back towards the cabin. At the initial crash site they encounter a large group of soldiers and government agents cleaning up the debris – and April and Kyle are immediately gunned down by the soldiers as they ask for help. Their bodies are dumped into a shallow grave and set on fire as the government sets out to conceal all evidence of the aliens. 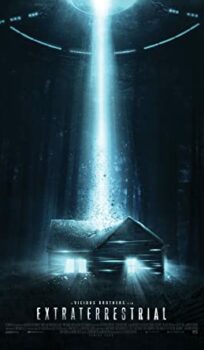