Note: If this sounds derivative or like a copy, keep in mind that it was released 6 years before The Wicker Man.

Philippe (David Niven) is a wealthy nobleman and absentee landlord.  He is summoned back to his ancestral lands, because the crops have failed 3 years in a row.  He insists that his wife (Deborah Kerr) stay in the city.  However, she ignores this and follows with the children.  When they arrive, she is frightened by the creepy, hostile villagers, and the repeated warnings that she should take their son away quickly.

The people follow a pagan religion, and believe the head of the family must give his life to make the land fertile.  Philippe’s father did not comply, and they blame this for the failing crops.  To atone, Philippe must be ritually sacrificed.  His wife pleads for him not to, but he views it as his ancestral obligation.  She goes to the local police, doctor and clergyman (Donald Pleasance), but they are all part of it.  While standing in a circle of hooded druids, Philippe is shot to death with arrows.

The wife and children go to the car to return to the city.  The son runs back into the manor, and finds the clergyman.  The son kisses the eye of the devil amulet, indicating that the clergyman has reached him, and he too will return when it is his time to be sacrificed. 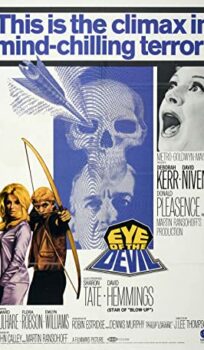