This movie is loosely based on the life of Jimmy Hoffa.

The first half of the movie is set in 1937.  Johnny Kovak (Sylvester Stallone) is an organizer for the local branch of the Federation of Inter-State Truckers, or F.I.S.T., headed by Mike Monahan (Richard Herd).  F.I.S.T. organizes a strike against a local trucking company, but the company uses strong-arm tactics to break up the strike, killing Monahan in the process. After his death, Kovak takes over the local, and asks Vince Doyle (Kevin Conway), a local gangster, for help.  With help from the mob, the union fights back, culminating in a huge riot, and forces a settlement with the trucking company.  With the support of the mob, F.I.S.T. eventually becomes one of the most power labor unions in the country.

The second half of the movie is set in 1959.  Johnny Kovak is now one of the most powerful people in the union.  During the annual F.I.S.T. convention, he is overwhelmingly elected the international leader of the union.  Now as the leader, Johnny quickly tires of the mob’s constant need for money and favors from the union, and he wants to get them out.  The head of the mob, Babe Milano (Tony LoBianco), thinks it may be time for Johnny to leave the union.  While all this is happening, U.S. Senator Andrew Madison (Rod Steiger) begins an investigation of the union.  Everything culminates at a Senate hearing, when Kovak is made to look bad by the senator when pressed about mob ties to the union.  That night, Johnny is ambushed at his home by two hit-men and killed.  The last scene of the movie shows a semi with a “Where’s Johnny?” bumper sticker on it. 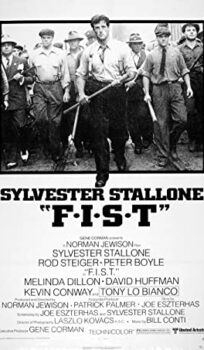