SHORT VERSION
Tyler (Bryan Brown) kills DeFranco (Jerry Orbach) with an electric shock. Mason (Mason Adams) is killed by the police with a gun super-glued to his hands. Tyler and McCarthy (Brian Dennehy) then go to Switzerland and get the stolen money.

LONG VERSION
Rollie Tyler (Bryan Brown) is a special effects expert who is hired by the Justice Department to stage the fake assassination of mob informant Nicholas DeFranco (Jerry Orbach). They are afraid that DeFranco will be targeted by the mob, but that would end if they think he is dead. The plan is to shoot DeFranco in a public restaurant using fake bullets and bloodpacks, like in the movies, with Tyler himself as the gunman. The plan goes flawlessly, and Tyler escapes the restaurant with Agent Lipton, the man who hired him in the first place. However, Lipton double-crosses Tyler and tries to kill him. He fails, and Tyler escapes and hides at his girlfriend’s apartment. The next morning, a sniper kills Tyler’s girlfriend, but it killed by Tyler when he enters the apartment to finish the job.

NYPD detective Leo McCarthy (Brian Dennehy) is assigned to investigate the two murders. Since he was the one who arrested DeFranco in the first place, he is disappointed when he is not assigned the DeFranco murder case. He is also convinced that the body in the morgue is not DeFranco’s. McCarthy’s investigation of the two murders reveals Tyler is the boyfriend of the dead woman and the sniper worked for the government. The investigation eventually leads to Colonel Mason, a supervisor in the Justice Department (Mason Adams), and Lipton’s boss. Mason was also in charge of DeFranco’s witness protection. McCarthy later learns that the assassination was faked, and Tyler was responsible. Meanwhile, Tyler has kidnapped Lipton and he learns from him that DeFranco is hiding at Mason’s house, and both he and Mason are planning on leaving the country that night.

Tyler sneaks into Mason’s house, using his special effects tricks to kill Mason’s guards. McCarthy is also at Mason’s house, but he has brought several state troopers with him. DeFranco shoots at Tyler, and he falls through a window pretending he’s dead. DeFranco then tries to leave the house for a waiting helicopter, but when he touches the door, he receives a deadly electric shock. Before he dies, he gives Mason a key to a Swiss safe deposit box which contains all of the money he stole from the mob. When Mason tries to leave the house, Tyler is there with an Uzi pointed at him. Mason then gives Tyler the key in an attempt to bribe him so he can escape. Tyler puts the gun down to think it over, and Mason picks it up. Tyler then tells Mason that the gun is not loaded, and he super-glued the gun, so Mason cannot put it down. Tyler then shoves Mason out the door, where the police shoot him dead. The police then enter the house, where they find everyone dead, including Tyler. Some time later, Tyler has been taken to the morgue, where he promptly escapes. He used fake flesh on his neck and wrists to fool the police. Just as he is about to get away, he is captured by McCarthy, who tells Tyler they need to talk.

The next scene is in Switzerland, where DeFranco is withdrawing all of his money. He goes to a waiting car, which is being driven by McCarthy. We then learn that it was actually Tyler, disguised as DeFranco, getting the money. The movie ends with the two men driving into the mountains of Switzerland. 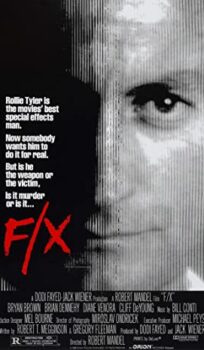