POOPER:
Montag runs into the burning building and is able to attach the tracking device to the bird and release it. Beatty follows him into the building and kills Montag with his flame-thrower. The bird makes it to Canada.

LONG VERSION:
Set in the future, all books are illegal. People found things in books that offended them, and since everyone wanted to be happy, the books were burned. There are three books that are exceptions to what is banned: the Bible, To The Lighthouse, and Moby Dick, and those can only be read on the internet, now called the 9. Anyone caught possessing literature (called graffiti), other than the three excepted books, whether it be downloaded from the 9 or an actual physical book, are considered rebels (called Eels), and their books or hard drives are burned and their identities are erased. Guy Montag (Michael B. Jordan) is a fireman, and in the future, firemen start fires instead of putting them out. He, along with his Captain John Beatty (Michael Shannon), go throughout the city of Cleveland chasing Eels who possess graffiti, and happily burn it. One night, Montag, Beatty, and the rest of the firemen go to a home full of books, and the woman who lives there chooses to burn up with her books instead of having her identity erased. Seeing this, Montag begins to question why books are illegal and why some people would rather die than see them burned, so he takes one of her books to be burned back home with him and reads it. Later, he meets a rebel named Clarisse McClellan (Sofia Boutella), but she thinks he is spying on her. After he shows her the book he took, and says that he would be killed if he is found possessing this book, Clarisse begins to tell him about the real history of America, and not what the government tells them, and that her fellow Eels are trying to save literature from the firemen.

The government learns that Eels have found a way to encode all of the literature in the world onto the DNA of a bird, and this bird will be released to Canada, where books are still legal. When it’s safely in Canada, scientists there will download the literature from the DNA, making it safe from being burned. Montag, Beatty, and the rest of the firemen are told their hideout is somewhere in Ohio, and if it’s in their city, they are to burn it down. The firemen are rounding up all of the suspected Eels, including Clarisse, and threaten to kill them if they don’t reveal the location of the hideout. When the Eels fight back, Montag is able to get Clarisse safely away. He also allows a man and his child to escape, but they are later caught by Beatty. Montag admits to the mistake and tries to resign, but Beatty won’t let him. After he leaves the firehouse, Montag is picked up by Clarisse and taken to the hideout. However, one of the other firemen sees this and reports it to Beatty. Once they get to the hideout, Montag learns that the Eels have already downloaded the DNA into a starling, and it’s ready to go to Canada. However, the head of the Eels, Toni Morrison (Khandi Alexander), tells him that the Canadians won’t be able to find it unless it has a tracker attached, but Montag tells her that there are trackers at the firehouse. He leaves to get one, but after he gets it, he is confronted by Beatty and the other firemen.

Beatty says they have a new house to burn, and they all go to it, only to find out it’s Montag’s house. Books were planted there, and Beatty orders Montag to burn down his own home. Afterwards, Beatty says that he suspected Montag had been sympathizing with the Eels, and tonight’s actions proved it, and he orders Montag to be arrested. Montag fights back, killing another fireman in the process, and he goes on the run. Despite everyone in Cleveland looking for him, Montag is able to stay hidden until Clarisse is able to find him hiding in the abandoned building where they first met, and together they head back to the hideout. But when they arrive, Beatty and the firemen are already there setting the place on fire and arresting the Eels. Toni is able to get away from them, and Clarisse helps her escape into the nearby forest. Montag runs into the burning building to save the starling and attach the tracker. Beatty follows him into the building and confronts him, but not before Montag is able to attach the tracker to the bird and release it. Once the starling flies out through a hole in the roof, an angry Beatty kills Montag with his flame-thrower. The movie ends with the bird safely flying over Lake Erie into Canada. 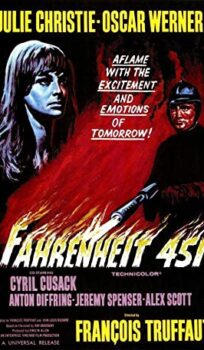