Lucy Martin (Ilana Glazer) and her husband Adrian (Justin Theroux) are a couple having trouble conceiving a child.  They go to Dr. John Hindle (Pierce Brosnan) who is a fertility specialist and a mentor to Adrian to help them. Lucy is inseminated using a special technique.  This results in her pregnancy which is exciting but Lucy is also advancing in her career so there’s some internal conflict there.

Dr. Hindle confirms her pregnancy and asks Adrian to present him with an award he’s won in a ceremony.  Lucy helps Adrian write the speech for the ceremony. She seems to have a negative impression of Dr. H. but tries to like him/be grateful for Adrian’s sake.

Dr. Hindle, during an ultrasound, discovers that there are three babies.  Twin boys who are sharing one placenta and a girl who has her own placenta.  Dr. H. suggests selective reduction in order to raise the odds of a healthy birth – he suggests terminating the female fetus but Lucy wants to terminate the two male fetuses in order to have a girl.  During the procedure, Lucy hears Adrian and Dr. H. talking/plotting something.

As her suspicions about Dr. H. grow, Lucy finds herself fascinated with a midwife named Grace Singleton (Zainab Jah). She imagines conversations with her, steals a magazine from Dr. H’s office that is about her (that his creepy nurse comes to Lucy & Adrian’s apartment to retrieve).  She also confides in a friend from her mothers-to-be group that she suspects Dr. H. did something bad and that Adrian is in on it.  Lucy has a weird dream that Dr. H. & Adrian are having an affair and then, upon waking up, finds a file about herself in Adrian’s safe.  She gives this to her mommy-group friend whose husband is a lawyer and is assured by her friend that it will all be okay.

Things begin going badly at work and Lucy is more and more fearful of Dr. H.  She tells Adrian she wants to switch to Grace.  She also discovers, at her baby shower, that her mommy-group friend is also a patient of Dr. H. and has done nothing to investigate what she found (she finds medicine in the friend’s bathroom prescribed by Dr. H.) Also, Adrian decides at one point to join Dr. H’s office so that it will be a shared practice which does not sit well with Lucy.

Lucy goes into labor and they go to Grace to aid with the birth.  It’s at this time that Lucy’s suspicions are confirmed – Dr. H. had terminated the female fetus and she is giving birth to the twin boys.  She gives birth to the first boy and Grace suggests they go to the hospital because Lucy is bleeding quite a bit.  Instead, Adrian takes her to Dr. H. who delivers the second baby and the terminated Wendy with her placenta.

Lucy realizes, in talking to Grace after the ordeal, that she had been imagining Grace as different than she really was.  Lucy had been seeing her in African style dress quoting wisdom but in reality, she’s just a midwife wearing plain clothing.  She has trouble bonding with the twin boys and goes to confront Dr. H. He reveals that he inseminated her with his own sperm and they end up having a physical fight. His nurse comes in to defend him but Lucy is able to drug the nurse (Dr. H. was going to drug Lucy) and beat Hindle badly.  She gets the fetus that Dr. H. had kept and returns home.

At home, she imagines picking up the twins and throwing them out the window – but in the hallucination, they float away in the air.  Adrian returns home and they argue.  Lucy is certain he knew all along, which he denies.  She gives him the two babies and orders him to leave. Lucy then takes the underdeveloped Wendy from the plastic bag she’s in ahd puts her nipple against the baby’s face. The baby then begins to nurse and the movie ends. (It is up to the viewer to decide if this is another hallucination or if it’s real – but likely a hallucination.) 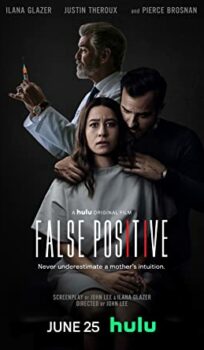