The heist at the lab goes bad, and Adam (Matthew Broderick) is arrested. His father Vito (Dustin Hoffman) decides that the only way to save Adam from prison is to throw his father Jesse (Sean Connery) under the bus. Vito tells the police and the D.A. that the entire caper was Jesse’s idea. Jesse is given a long prison sentence, while Adam and Vito only get probation. Adam, who loved Jesse, is furious at his father’s betrayal, and won’t speak to him.

Jesse becomes ill and dies in prison. Adam and Vito reconcile, but only after Vito admits to Adam that the time he spent plotting the robbery with Adam and Jesse was the most fun he ever had.

Jesse’s funeral is held in the slums of the Lower East Side of Manhattan, where Jesse grew up. Hundreds of policemen and criminals alike come to give Jesse a grand sendoff, and they all sing “Danny Boy” with Adam andVito. 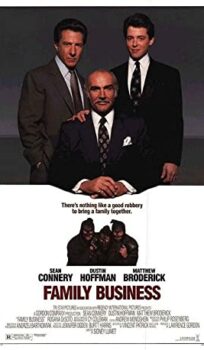