On a planet where Oms (humans) are kept as pets by blue skinned Draags ten times their size, an escaped pet named Terr takes a Draag headset (learning device) to a group of wild Oms. During an extermination campaign by the Draags, Terr’s group unites with a rival Om group. The Oms flee to an abandoned factory while extermination efforts by the Draags increase. The Oms advance technologically to the point where they achieve space travel.

The Oms fly to the FANTASTIC PLANET, where headless naked statues are mounted by spheres of Draag spirits as a result of Draag meditation. Once mounted by these spheres, the statues dance with each other.

The version I saw was in French and my French is not so good for following a movie that looks like it is on acid BUT, I think the reason the Draags dance on this planet has something to do with some kind of positive energy the Draags need.

The Oms start blasting the statues causing great distress to the Draags (apparently, having a dancing naked statue blasted while your spirit is mounted on it is very disturbing) and the Draags realize they must live in peace with the Oms. 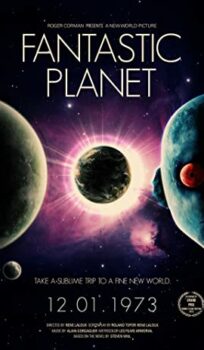