The film consists of 3 intertwined storylines.  As a global conclussion for them all, it can be said that they all finish abruptly and in a slightly ambiguous note, as a clear indicative that there’s never an easy solution for any dilemma in life – specially, in our contemporary, over-complicated world -, and we can all feel a little dumbfounded, just as when the movie ends.  Here’s why:

Raúl and Sylvia’s storyline:
After Raúl (Wilmer Valderrama) is left without a job and seemingly disabilitated as a consequence of his unfortunate accident at the meat plant, Sylvia (Catalina Sandino Moreno) goes to her sister Coco (Ana Claudia Talancón) -whom she had alienated from due to her erratic behavior-, makes up with her and asks her to ask Mike (Bobby Cannavale) for a position that would allow her to earn a little more than as a housekeeper.  Before obliging, Mike makes Sylvia have sex with him.  He sets her up, however, at the slaughterhouse, where she witnesses the horrific process of killing, gutting, dismembering and skinning the cows (a sequence NOT for the faint of heart); her specific place ends up being at the part where she is supposed to separate the kidneys from the removed internal organs.  The foul smell and painstaking panorama makes her cry.

Amber’s storyline:
Responsible and level-headed Amber (Ashley Johnson) quits her job at Mickey’s, as she finds herself attracted to a group of idealistic teenagers led by Andrew (Aaron Himelstein) and Alice (Avril Lavigne).  They all participate in a plan suggested by fellow member Paco (Lou Taylor Pucci), which consists of dismanteling one side of the fence that keeps a herd of live cattle within a farm, awaiting their demise.  Sadly, the cows don’t realize this and don’t flee the farm.  The kids end up having to run off because a vehicle was approaching.  They realize how futile everything was, just as bad guys always seems to win in real life, as Alice appoints.

Don’s storyline:
Don Henderson (Greg Kinnear), the executive from the Headquarters of Mickey’s, after his extensive research, in which he not only discovers some shocking hidden facts and truths about the process meat follows to become a hamburger pattie (sh..t hidden within the meat, among other things!!), but also forcibly comes to understand that: he won’t be able to really change anything; he could lose his job out of it; and Mickey’s will always be Mickey’s, the almighty, mega-buck earning franchise it is; he brings up to the Board an idea for a new BBQ Big One variety (this is seen shortly after the credits start to roll).

As an additional detail, we are also shown, shortly before the end, a new group of illegal Mexican immigrants that are picked up by Benny (Luis Guzmán), one of the “coyotes” from the beginning of the film.  In front of the group, there are two boys whom Benny offers a couple of Mickey’s small meals to, as he says: “Welcome to America”.  As an indicator of a repetitive vicious circle. 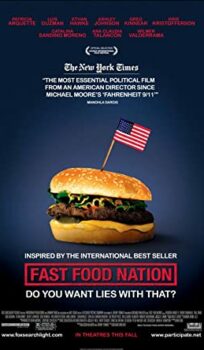