SHORT VERSION:
When Francis looks at Pascal’s list of cats on his owner Ziebold’s computer, he realizes that Pascal is the killer, as well as the fact that he is the legendary Claudandus.

Claudandus then appears and explains to him that he was trying to breed cats back to their original form – the Felidae – and he was keeping the list of cats on his owner’s computer so he could systematically cull through unworthy male breeding candidates. He also killed any females chosen to re-establish the Felidae who were impregnated by the unworthy ones. His aim for breeding the Felidae was to kill humans, for he came to see them all as bad during his days as one of Dr. Pretorius’ test subjects.

Since he was now dying of cancer, he had hoped for Francis to succeed him, since he saw him as a strong cat. Francis tells Claudandus that he doesn’t want any part of his plan, so he deletes the list of cats and then kills Claudandus in the ensuing fight.

Francis’ life returns to normal, and he begins a relationship with Nhozemptekh, a Felidae cat that he had a sexual encounter with earlier.

LONG VERSION:
While looking at Pascal’s list of cats on his owner Ziebold’s computer, Francis realizes that Pascal is the murderer, as well as the fact that he is the legendary Claudandus. Claudandus then appears and explains his whole plan to him.

After Dr. Pretorius went mad, Claudandus spoke to him. Fascinated, Pretorius let him out of his cage, and Claudandus used the opportunity to attack him and kill him. Ziebold, Protarius’ assistant, took him in after that, and because Ziebold idolized the famed geneticist Gregor Mendel, Claudandus began to study Mendel’s theory of genetics, which stated that heredity was subject to laws of nature. He eventually came to believe that, through this, he “could turn the cycle of history back to an earlier time of glory for cats.” He became friends with Joker and shared this vision with him, and Joker spread the word that a new age was dawning – in the process creating the Claudandus Sect – while Claudandus handled the scientific aspects of the project. He started with a single pair, but the program soon broadened out, so he made the list on his owner’s computer of every cat in town and began to systematically kill the males he deemed unworthy in order to preserve the racial purity that this new Felidae required, as well as kill any worthy females who became pregnant by these unworthy candidates.

Because he was dying of cancer, he decided to involve Francis because he liked everything about him and saw him as his successor. That was why he had Nhozemptekh – a Felidae cat – have sex with him. Claudandus also admits to Francis that he was the one who created Francis’ nightmares, which he did in order to get him to understand what his agenda was, as well as get him to understand his hatred of all humans. He saw all humans as bad during his days as a test subject for Pretorius, so his main reason for breeding the Felidae was to kill them. He also killed Joker because he would’ve told Francis everything (which Joker actually agreed with, so he was killed willingly), and he killed Felicitas because she knew too much.

Francis tells Claudandus that he wants no part of his plan, and then he deletes the list of cats. Claudandus leaps at him, but Francis quickly avoids him, so Claudandus hits the monitor. It falls and breaks open on the floor, and sparks shoot out of it and ignite a nearby curtain, and soon the whole house catches fire. Francis fights Claudandus and kills him by slicing his chest and stomach wide open with his claws, spilling his internal organs. Francis then finds the wounded Blaubart (who was attacked earlier by Claudandus) and drags him outside to safety before the house burns down.

Francis’ life goes back to normal, and he starts pursuing a relationship with Nhozemptekh. He narrates that we shouldn’t give up on the idea of a world in which all animals and people can live together. He muses that maybe we all need to grow a bit more, maybe into Felidae. 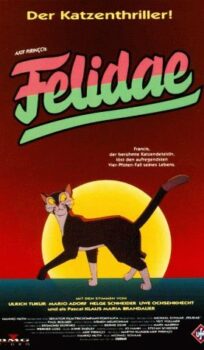