Ferdinand is a gentle bull who loves flowers and refuses to fight. As a calf, he escapes the ranch he was raised in and is taken in by a girl named Nina and her father. Ferdinand grows to be a big bull and ends up back at the ranch after going into town and causing chaos.

A famous bullfighter, El Primero, wants to select a tough bull for his last fight, and he picks Ferdinand after seeing him reluctantly fight the more aggressive Valiente. Ferdinand breaks himself and his friends out after realizing that the bulls will either be forced to fight and die in the ring, or get sent to a slaughterhouse. Ferdinand frees his friends but is captured again and taken to fight.

Ferdinand is forced to fight El Primero and nearly gains the upper hand (or hoof) but he sticks to his principle of not fighting. El Primero spares Ferdinand when the audience is won over by the bull. Nina finds Ferdinand and takes him and all of his new friends back to the farm. 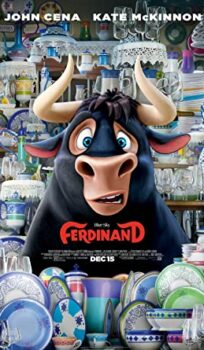