Vince (Kevin Kline) has been stealing the zoo’s sponsorship money. Rollo (John Cleese), Willa (Jamie Lee Curtis), Bugsy (Michael Palin) and a bunch of the zoo keepers stop him from escaping with a bag of the stolen money.

Rod (Kevin Klines) arrives to announce that the police are coming to arrest Vince. Vince tries to shoot Rod but chickens out, and when Bugsy picks up the gun it goes off, shooting Rod between the eyes. The keepers dress up Vince to look like Rod so to greet the arriving policemen and get them to witness his signing of a “new” will which says that Vince gets Octopus Inc and the keepers get the zoo. Vince then fakes Rod’s suicide.

Rollo and Willa get together, and stay at the zoo with the rest of the keepers. 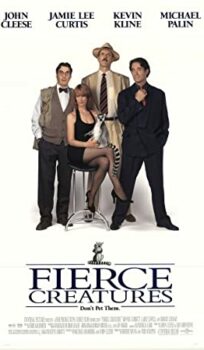