Pooper:
Saraya is called up to the WWE main roster and is a great success under her wrestling moniker Paige. Her brother Zak overcomes his depression and embraces his role as a trainer and family man.

Long Ending:
Based on the real-life story of WWE professional wrestler Paige.

The Knight family owns and performs in a very small wrestling company in England. The company includes parents Julia (Lena Headey) and Ricky (Nick Frost), son Zak (Jack Lowden), and daughter Saraya (Florence Pugh). Another son, Roy, is in jail. The family dreams that one day the kids will become stars in the World Wrestling Entertainment (WWE) – the world’s most successful professional wrestling company. When not performing before small crowds, the Knight family trains various youths and teens in the community to wrestle, including a blind kid. Zak also learns that his girlfriend is pregnant.

After sending in an audition tape, Zak and Saraya are invited to a tryout by WWE before a big show. While there, the duo meet The Rock (Dwayne Johnson, playing himself). They then go to the audition presided over by a wrestling trainer named Hutch (Vince Vaughn). Although both Zak and Saraya are much more talented than the other wrestlers at the audition, only Saraya is selected to attend WWE’s training academy in Florida. She initially refuses to go unless they also take Zak, but she eventually relents. Although Ricky and Julia are excited, Zak can’t help but be bitter that he didn’t get the opportunity.

Saraya moves to Florida and begins training under the name “Paige” (inspired by a witch from the TV show Charmed). She is dismissive of the other female trainees as none of them have a wrestling background but are former models, cheerleaders, and dancers. She is also somewhat intimidated by them as they are more conventionally attractive and comfortable being scantily clad. Meanwhile, Zak continues to try and get accepted by the WWE. But Hutch remains firm that Zak is not fit. He angrily begins blowing off his family and friends. Both Knight children soon sink into depression.

Saraya is embarrassed when she fails to complete a training session that every other female trainee passes and later flops before a hostile live crowd. She is also humbled by the other female trainees when she realizes they have as much drive as she does but has been training harder. Saraya finally demands Hutch let Zak attend the training too. Hutch explains that Zak could never rise above a journeyman level and will likely ruin his life looking for a big opportunity that will never come. Hutch himself experienced that very life, eventually being forced out of wrestling due to the injuries he suffered while performing with more talented wrestlers. Hutch tells Saraya that she also should quit and return home to live a happy life with her family as she’s clearly lost her competitive fire.

Saraya returns to Britain where her parents have sold tickets to a wrestling match between her and her brother. Her reputation as a future WWE wrestler has greatly improved attendance at her family’s wrestling events. Before the match, Saraya tells Zak she is quitting. Although he is supposed to lose to Saraya, an irate Zak demolishes her in the ring. Afterward, the siblings argue. Zak critiques Saraya for “stealing” his dream and then quitting, while she tells him that he isn’t appreciating the life and family he’s built for himself. After some reflection, Saraya decides to return to America and rededicate herself to being a WWE wrestler. Meanwhile, Roy is released from jail and says he probably wouldn’t have ended up there if he had Zak keeping him on track like Zak did with Saraya. Zak finally realizes how meaningful his work with the community is and overcomes his depression.

Upon returning, Saraya mends her relationship with both Hutch and the other female trainees. She harnesses her considerable talent and begins becoming a successful professional. One night, she is invited to the Rock’s suite where he tells her that Hutch has arranged for her to be called up to the WWE main roster and make her television debut. He also calls her family to congratulate them (and they first assume it’s a prank call and hang up on him).

Paige makes her debut with WWE, facing the current women’s wrestling champion. Although she initially freezes, her talent and training allow her to recover and she wins the title belt. The Knight family celebrates wildly while watching from home.

There are cameos featuring wrestlers like The Big Show, The Miz, Sheamus, Zelina Vega, Lana, Toby Clements, and Bomber Dave Mastiff. Director Stephen Merchant also has a small role, and many of Paige’s real-life family members have cameos. 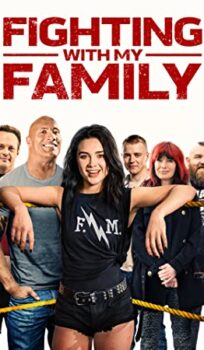