Four well dressed best friends, Jameson (Alexander Ludwig), Nelson (Reece Thompson), Shane (Cameron Bright) and Daniel (Logan Huffman) have a dark secret. Every now and then, they have Jameson charm a young local woman, bring her deep into the woods, and hunt her down and kill her. The pattern continues with Veronica (Abigail Breslin).

What the four didn’t count on is that Veronica had been trained all her life by the mysterious William (Wes Bentley) so she could kill killers, much like the one that murdered his wife and daughter. When they start their hunt again, Veronica is already on the offensive, since she had given three of the killers alcohol laced with LSD. She manages to kill Daniel, Nelson and Shane before being confronted by Jameson. They fight hand to hand before Veronica knocks him out and forces him to drink the laced alcohol.

When Jameson wakes up, he has a noose around his neck and is standing on a tree stump. As he begs in vain to Veronica, he hallucinates all his victims coming to get him and in his panic, steps off the stump and hangs himself. William arrives and tells Veronica she did well. They go to a local diner to celebrate. 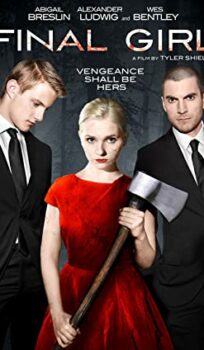