Finch Weinberg (Tom Hanks) is a robotics engineer living in a post-apocalyptic wasteland St. Louis after a solar flare ripped through the ozone layer and exposed Earth to extreme ultraviolet radiation and harsh weather. He is dying from radiation poisoning and builds a robot (later called Jeff) to care for his dog Goodyear when he is gone.

Finch evacuates Jeff and Goodyear from their bunker when Jeff reports from a weather station that there is an incoming superstorm that will last 40 days. They head to San Francisco, where Finch continues to help Jeff upload knowledge while instructing him how to care for Goodyear and reminding him to watch out for survivors who might attack them.

Finch eventually dies from his illness, but Jeff has gained enough intelligence to get himself and Goodyear to San Francisco, where they head out to find more survivors. 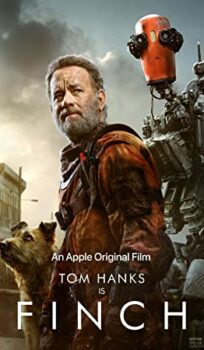