Pooper:
Dory manages to remember much of her past and ultimately reunites with her mother and father. With the help of her new friends and self-confidence, she saves Nemo, Hank, Marlin and the rest of the animals bound for Cleveland. The film ends with Dory living happily back at the reef with Nemo, Marlin, Hank and her parents.

Long Endings:
The movie opens in flashback, with a young Dory (Sloane Murray) being taught by her mother and father (Diane Keaton and Eugene Levy) how to live with her short-term memory loss. Her parents love her dearly, but are very overprotective given her condition. They build a trail of shells leading to their house so that Dory can always find her way home. We jump forward to see young Dory lost in the ocean. As she ages (now voiced by Lucia Geddes), she searches for her parents over the years, but slowly forgets what she is looking for. Ultimately, adult  Dory (Ellen DeGeneres) bumps into Marlin (Albert Brooks) and the events in Finding Nemo occur.

While accompanying Nemo (Hayden Rolence) on a field trip, Dory hurts her head and remembers that her home was in California. After some convincing, Marlin agrees to accompany Nemo and Dory on her quest to return home and find her parents. They hitch a ride with Crush (Andrew Stanton) and the turtles to California. After surviving a giant squid attack, Dory gets stuck in plastic soda can rings and some human wildlife rescue workers capture her and take her to the nearby marine life rehabilitation center and amusement park. As celebrity voice for the center Sigourney Weaver (herself) narrates, the park is meant to engage in rescue, rehabilitation and release.

Nemo and Marlin, with the help of sea-lions Fluke and Rudder (Idris Elba and Dominic West) and a bird named Becky, manage to break into the park and begin looking for Dory. Meanwhile, Dory is deemed incapable of rehabilitation and affixed with a tag marking her for transport to an aquarium in Cleveland. She befriends an escaped octopus with a missing arm named Hank (Ed O’Neill). They strike a deal that if he helps Dory find her parents, she will give Hank her tag as he does not want to return to the ocean. Along the way, Dory recovers various memories and realizes that she grew up in the park and that the “just keep swimming” song was taught to her by her mother. She meets her former best-friend, a whale shark named Destiny (Kaitlin Olson) and Destiny’s friend Bailey (Ty Burrell) a beluga whale (this explains why Dory can speak whale).  Destiny tells Dory which tank she came from and Hank drops her off in the tank before taking her tag and going to the loading bay to await transport to Cleveland.

Once in the tank, Dory finds her home empty. Seeing her home triggers her memories about how she lost her way. Her mother was crying over Dory’s chances of succeeding in life with her condition, Dory went in search of her mother’s favorite purple seashells to cheer her up. Dory accidentally got sucked into the tank’s pipes and ultimately ended up out to sea.

Dory is then informed by another denizen (John Ratzenberger cameo) that all the blue tangs (the type of fish Dory is) were just recently brought to the loading dock to be transported to Cleveland. Dory summons her courage and enters the pipes so she can swim to the loading dock. In the pipes, she is reunited with Nemo and Marlin. With Bailey and Destiny’s help, they navigate their way to the loading dock. Hank carries the threesome into the blue tang tank, but the tangs inform Dory that after she disappeared, her parents also broke out of the park to try and find her and have never been seen again. The fish and Hank are then boxed up, with Dory accidentally falling out of the tank, falling through a sewer grate, and ending up into the ocean alone.

As she cries and begins to forget her mission and her friends, she sees a row of seashells. This jogs her memory and she follows the seashells…. to find her parents. After they escaped, they set up lines of seashells to their new home in the belief Dory would one day return to them. After reuniting, Dory rallies Destiny and Bailey to escape the park and they, along with Dory’s parents, Fluke, Rudder, Becky and some sea otters, manage to sneak Dory onto the truck to Cleveland. She gives a stirring speech convincing all the fish and Hank to return to the ocean. Nemo and Marlin also tell Dory that she is part of their family now. Hank and Dory manage to hijack the truck and drive it into the ocean where all the fish go free.

We jump ahead. Marlin, Nemo and Dory are back home in their reef. Hank and Dory’s parents have moved home too. Dory and Marlin express their satisfaction in how everything turned out in the end.

During the credits, Hank uses his camouflage to hide on various background scenery. In the post-credits scene, we watch as a seal named Gerald stealthily tries to sneak onto Fluke and Rudder’s rock (though they have forbidden him from coming up on their rock). We then see filthy plastic bags float by in the water. It is revealed that the bags contain Gill and his fellow escapees from Finding Nemo – all of whom are (implausibly) still alive. They are scooped up by some employees of the park, suggesting that their rescue from the plastic bags may soon be at hand. 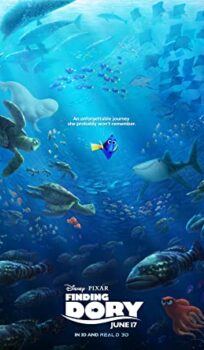