In July of 1973, Bruce Lee died during the production of his dream movie Game of Death.  With only 12 minutes of footage featuring Lee, the producers decide to continue making the film, with a stand-in replacing Lee for the rest of the scenes.  This fake documentary follows several actors and the production crew in their attempt to find “the next Bruce Lee.”

The crew hold an open audition for Lee’s part, with most of the actors having little to no acting ability, karate expertise, or even physical resemblance to Bruce Lee.  The crew doesn’t really care either; they’re just looking for the next superstar.  They find an experienced New Zealand actor named Eli who would be perfect, but he turns down the role.  They instead settle on three finalists for the executive producer/studio head (Sam Bottoms) to choose from.  One is Breeze Loo, a b-movie actor who resembles Lee and has done several other karate movies, but is recovering from a beating from another actor (Loo stole his girlfriend/manager away from him).  Another is an Asian actor who is much taller than Lee, and the third is a half-Chinese, half-American white guy who is also the assistant casting director’s boyfriend.

Martey Kurtainbaum, the executive producer, hates all three choices and has them thrown out of his office.  He also kicks out the documentary film crew but leaves his microphone turned on.  He proceeds to chew out the entire crew for not taking the job seriously and fires everyone, including the director, who happens to be his son!  In a later interview, Martey says that he could find a replacement for Lee in 5 minutes without even trying, because the public will only care about the scenes with Bruce and not care about the rest of the film.

The movie ends with title cards stating that an actor was eventually found (he wasn’t part of the audition) and the finished film did not resemble Bruce Lee’s original vision of Game of Death in any way. 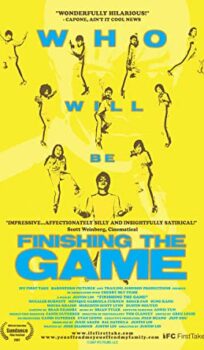