Max (Chuck Norris) and Patricia (Melody Anderson) find the temple where the treasure is kept, but while searching for it, they find Leo (Louis Gossett, Jr.) – who disappeared the previous day – in one of the rooms, hanging over a pit of boiling water by a rope around his hands. Then, El Coyote (Sonny Landham) emerges, and he threatens to drop Leo into the water unless Max surrenders the gold dagger to him. Max tells Coyote he’ll give him the dagger in exchange for their freedom, which he agrees to, and he allows Patricia to leave the room first. However, as she exits, the door shuts on her, and Coyote reveals that he intends to use her as his sacrifice to gain the power of the Firewalker. He then leaves and starts flooding the room with more water to kill Max and Leo, and then he seizes Patricia and starts preparing the sacrifice.

Max and Leo manage to escape and get to the altar room, and Max shoots and seemingly kills Coyote just a second before he can kill Patricia. As the trio look around again for the treasure, Patricia realizes that the dagger is supposed to go into the top of the skull at the head of the altar. When she puts it there, a secret tunnel opens up below, and they go down inside and find the treasure. After bringing up a few bags of it, a revived El Coyote attacks them, but Patricia eventually stabs him in the back with the dagger and Max knocks him out on the altar. Patricia then uses the special dust Tall Eagle (Will Sampson) gave her and covers Coyote with it, and as the trio leave with the loot, the dust sets Coyote ablaze and kills him.

The trio is last shown enjoying their newfound wealth in Fiji, but the General (Richard Lee-Sung) is working as a bartender at the resort they’re staying at, and after seeing them, he says “So, gentlemen, we meet again” and laughs. 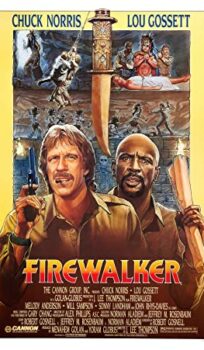