Vietnam vet John Rambo (Sylvester Stallone) arrives at the home of his military buddy Delmar, and is devastated to learn that Delmar died of cancer from Agent Orange.  Rambo is a highly trained expert in guerrilla warfare and Medal of Honor recipient, but is now a homeless drifter.  Sheriff Teasle (Brian Dennehy) tries to run him out of town.  Rambo won’t be intimidated, so Teasle arrests him.  The cops are abusive, and cause flashbacks to Rambo’s time as a POW in Vietnam.  Rambo beats up a few cops and escapes.

The police pursue Rambo into the mountains outside town.  An officer, shooting at Rambo from a helicopter, falls out of the helicopter to his death.  Teasle claims Rambo killed the officer, and is determined that he will get Rambo.  Rambo set up traps to injure and disable each pursuing officer.  Rambo captures Teasle, and tells Teasle that he could have killed each officer, but he does not want this war with Teasle.  Teasle calls in the National Guard.  Rambo’s old commanding officer, Colonel Trautman, arrives.  Trautman insists that Teasle’s men are no watch for Rambo, and if Teasle sends in all these men, he better have enough body bags for them.

Rambo hijacks a military truck, and heads into town at night.  Rambo shoots out the transformers, plunging the town in darkness.  Rambo starts huge fires in a gas station and a gun & ammo store.  Teasle is on the roof off the police station, with a sniper rifle, looking for Rambo.  Rambo enters the police station, and shoots through the roof, injuring Teasle.   Trautman enters the station to urge Rambo to call it off .Rambo gives a bitter speech about how he didn’t ask to go to Vietnam, but he did what his country told him.  On his return, he is cursed and vilified for his service.  Trautman persuades Rambo to give up.

(Note that in the whole movie only one person dies, falling from the helicopter.  Rambo makes a big point of not killing anyone, despite many opportunities to retaliate against people who are trying to kill him.) 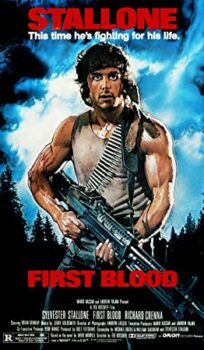