(aka The Chinese Connection)

Chen (Bruce Lee) gets his revenge on Suzuki (Riki Hashimoto) sometime after he gives his students the order to kill all members of jing woo school.  Most of the students weren’t at the school because they were trying to find Chen before the cops do and when they came back, they saw the aftermath of the massacre, all but one student aside are dead, that student reveals that Suzuki attacked them.

Chen quietly goes back to Jing Wu school and Overhears the detective (Lo wei) along with the Japanese consulate tell his peers that unless he turns himself in they will close down the school and arrest them. Guilt-ridden, Chen then surprises everyone with his return,  he turns himself over to the police, in exchange for their word along with the word of the Japanese consulate that Jing Wu school will not be harmed.

As they all walk out the door the school is surrounded by a large crowd and members of the national guard lined up with guns, possibly with the intention of closing down the school permanently.  Thinking he has been double-crossed, Chen lets out one final raging scream and tries to jump over the National guardsmen.  (The last shot was frozen during mid-jump, but gunshots could be heard implying that Chen was killed off-screen.) 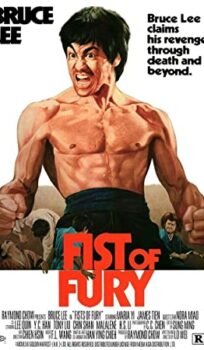