Martijn (Ryan Phillipe) is a Dutch pianist who has been kidnapped by a terrorist cell led by Ahmat (Laurence Fishburne). Ahmat wants to know where Martijn got the money for his “food program.” When Martijn cannot give satisfactory answer, they begin to cut off his fingers. After losing four fingers, the first big twist is revealed; Martijn is not as innocent as he appears. He is in actuality, the leader of a Dutch sleeper cell. His “food program” is a plan to poison fast food in the United States and kill thousands. He got the money through a friend of his girlfriend Saadia, who we realize is a terrorist as well.

In attempt to prove who he is, Ahmat proposes he writes the names of the cell members, which he will match to his intelligence. Martijn does so, but Ahmat’s pages has nothing but the phrase “Thank you” on it. Ahmat leaves and one of his cell kill Martijn.

Here the second big twist is revealed; Martijn in his haste to prove who he was, never questioned if his captors were who they said to be. It turns out Ahmat and his two cohorts are CIA. Gavin (Colm Meaney), Martijn’s supposed security was an agent as well and his death was staged. The whole kidnapping and torture was a sting operation in order for Martijn to admit he was a terrorist and give up the members of his cell. Ahmat leaves to have a drink with the woman known as Aicha (Gina Torres) who is the only one visibly shaken by what she had to do (and that they killed Martijn in cold blood). The camera pans out and we see that they were holding Martijn in a warehouse in NYC. 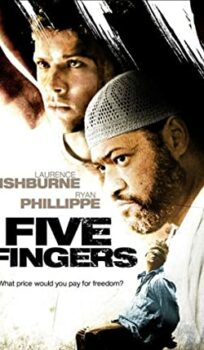