Our hero, Flash Gordon (Sam J. Jones) is the New York Jets’ star quarterback. Due to a series of natural disasters a plane that he and Dale Arden (Melody Anderson) are flying in crash into the laboratory of Dr. Hans Zarkov (Topol). Dr. Zarkov has built a spaceship and tricks Flash and Dale onto the ship. He launches the three of them into space, believing that the disasters are being caused by an alien lifeform. The ship is pulled onto the planet Mongo which is ruled by the merciless Emperor Ming (Max Von Sydow). Emperor Ming is indeed responsible for all the disasters. He orders Flash killed, Dale to be made into his concubine, and Dr. Zarkov to be brainwashed into a henchman.

Flash is brought back to life by Emperor Ming’s sexy and traitorous daughter Princess Aura (Ornella Muti). After many other escapades and life-threatening situations, Flash manages to unite Prince Borin (Timothy Dalton) of neighboring planet Arboria and Prince Vultan (Brian Blessed)  of neighboring Sky City. After Emperor Ming destroys Sky City, the two Princes and Flash lead an assault on Emperor Ming’s palace. Meanwhile Emperor Ming attempts to marry Dale, so that she can bear him an heir before he kills her. Flash manages to pilot a space ship through Emperor Ming’s defenses and smashes the spaceship right into Emperor Ming. Emperor Ming dies soon after, his power-ring falling to the floor. Flash has saved Dr. Zarkov and the planet Earth, and he and Dale fall into a passionate embrace. Princess Aura and Prince Borin take Emperor Ming’s place and erect a statute in Flash’s honor. As the three Earthlings prepare to return home to Earth, an unidentified hand scoops up Emperor Ming’s ring as we hear the Emperor’s laughter over the band Queen’s soundtrack as the credits roll. 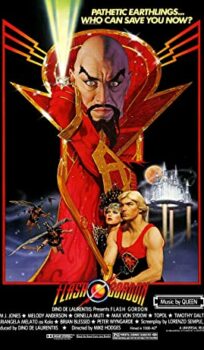