SHORT VERSION
Robert Kearns wins his case against Ford and is awarded $10 million and the right to officially call the intermittent windshield wiper his invention.

LONG VERSION
Set in the mid-1960s, Robert Kearns (Greg Kinnear) is a university engineering professor who is married and has six kids.  He is also an inventor, and he has developed the prototype for the intermittent windshield wiper.  He did it to help his vision (he’s blind in one eye) while driving due to constantly moving windshield wipers.  He patents his invention and demonstrates it to Ford Motors executives, who admit that they have been trying to develop an intermittent windshield wiper without success.  Impressed with his invention, one of the executives asks Kearns for a business plan detailing the cost of the individual units, which Kearns plans on manufacturing himself.  Against the advice of his best friend and business partner, Kearns rents out warehouse space and begins to turn it into a factory with the intention of making intermittent windshield wipers.  Kearns later turns over his business plan and a working sample of the wiper to Ford, but they never get back in contact with him.  A few weeks later, his partner tells Kearns that the Ford deal is off.

Some time later, while trying to get the sample back from Ford, Kearns sees the new Ford Mustang at an auto show, and discovers to his horror that the car has intermittent windshield wipers.  After some investigating, Kearns figures out that the design Ford used for the wipers is identical to his design.  Kearns wants to sue Ford, but his partner doesn’t have the stomach to fight them and quits.  Kearns lawyer (Alan Alda) takes the case, and is able to get a settlement offer from Ford for $250,000.  Since the offer does not include Ford admitting they stole his idea, Kearns rejects the offer and wants to take the case to court.  This decision is the beginning of a long descent for Kearns as he becomes obsessed with taking on Ford.  The lawyer quits the case, and no one else wants to take it.  He loses his job, his wife leaves him, and he becomes estranged to all of his kids.  Kearns even spends several months in an asylum as he is treated for his obsession.

Several years later, Kearns’ persistence pays off as a court finally agrees to hear his case.  Kearns will act as his own counsel, and his now adult kids come back to help him in his case.  On the eve of the trial, Ford offers another settlement for $30 million, but it’s also rejected because Ford will still not admit to stealing his idea.  At the trial, Kearns tries to convince the jury that Ford violated his patent by using his invention as the basis for their intermittent windshield wiper.  Ford contends that they had a working wiper before they ever heard of Robert Kearns.  The jury rules that while Ford did have a plan for an intermittent windshield wiper, it was too similar to Kearns’ wiper, and he is awarded $10 million.  Kearns also has the right to officially claim the intermittent windshield wiper as his own invention.  Title cards at the end of the movie reveal that Kearns also sued the Chrysler Corporation for violating his patent and is awarded $18 million from them.  Robert Kearns died in 2005. 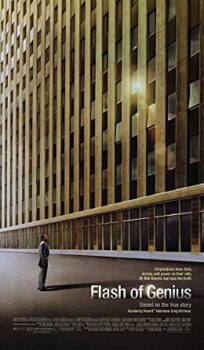