Dave (Kevin Bacon), realizing that they all must “atone” for the sins that are haunting them, tracks down the girl he used to mock and apologizes. Rachel (Julia Roberts) confronts her father’s spirit, only to find that he wants her forgiveness.

Nelson (Keifer Sutherland) takes Joe (William Baldwin) and Steckle (Oliver Platt) to a graveyard, and reveals that he is being tormented because as a child he bullied a boy named Billy Mahoney and accidentally caused his death.

Driven to desperation, Nelson decides to “flatline” himself in order to apologize to the boy in the afterlife. Dave, Rachel, Joe, and Steckles find him in the lab, and are able to revive Nelson even after he is dead 12 minutes. During that time, he has told Billy that he was sorry, and realizes he has been forgiven. 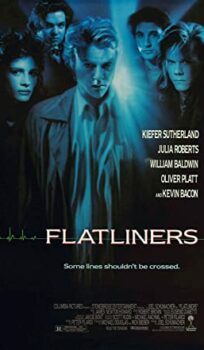