Middle aged men Doakes and Davis are talking. Doakes is rattled, because a palm reader gave him an ominous fortune, and then he dreamed it came true. Davis has a book on the occult, and thinks the stories in it will help his friend. We watch the stories they read.

In the first segment, Henrietta (Betty Field) is angry at the world, because she thinks an ugly girl like her will never find romance. A kind old man points out that since it is Mardi Gras, she can wear a mask and see what it is like to be beautiful. He fits her with a skin tight mask, and sends her to the law student she pines for. He immediately falls for her, and they have a wonderful night dancing together. She wants the law student to drop his studies and run off with her, and he agrees. At that moment, she hears the kind old man’s voice telling her that real beautiful is internal. Her inner selfishness and bitterness are what make her ugly to others. She leaves the law student, telling him it would ruin his life to drop his studies now. He pursues her. When she removes the mask, her own face is now the beautiful face of the mask. She will help him finish his degree, then they will marry.

In the longest segment, a palm reader is amazing people at a party. He tells Tyler (Edward G Robinson) that the girl of his dreams will marry him. However, unless Tyler commits murder before the wedding, he will accidentally kill his bride. The girl is engaged to someone else, so Tyler is skeptical. That same night, she dumps her fiancé, and returns to Tyler. Tyler tries to commit murder, but fails several times. The night before the wedding, Tyler paces the streets frantically, thinking he has to commit murder or his bride will die. He runs into the palm reader, and strangles the man to death. However, it is witnessed by a police officer, and so Tyler is immediately arrested.

In the final story, Gaspar (Charles Boyer) is the worlds greatest circus tight rope walker. He begins to repeatedly dream that in the most difficult moment of his show, when he jumps from one rope to another 75 feet in the air, a woman in the audience screams. In the dream, he falls to his death. He is so rattled by the dream, he can no longer perform. Gaspar meets the woman from the dream, Joan (Barbara Stanwyck). While she views “I saw you in my dreams” as a pathetic pick up line, eventually they fall for each other. Gaspar is convinced that if she comes to the show, knowing not to scream, he will recover his nerves. She refuses to go to the show and dumps him. She has a change of heart and goes to the show. When he jumps, she screams, but he lands safely. He resumes his successful career and gets the girl.

The stories have reassured Doakes that he has nothing to fear. He leaves happily. 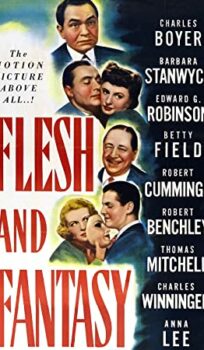