Everyone on the plane has been dead the entire time.

A bout of turbulence shown earlier in the film, caused the breakage of a critical seal. This damage caused an immediate decompression of the entire plane. The oxygen masks malfunctioned which lead the immediate deaths of the flight crew and all passengers abroad the plane.

The ghost figure that is stalking the passengers takes them to the afterlife after they “let go” of whatever is keeping between life and death. After seeing their dead bodies, and a news report that confirms that the plane will crash into the ocean once it runs out of fuel, most let go and pass on. Brad (Ryan Kwanten) and Pia (Amy Smart) mend their differences, and join each other in the afterlife.

In the last scene, Liz (Nicky Whelan) wakes up in the plane alone, being the only one who couldn’t accept her death. When she opens a compartment, a ghost hand reaches out. She screams as the screen cuts to black, and she too is forcibly taken into the afterlife. 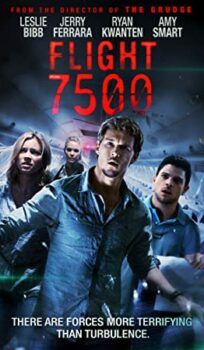