After escaping the NASA base in the spaceship and landing in a cow pasture 20 miles away, David (Joey Cramer) learns from the ship’s robot Trimaxion/Max (voiced by Paul Reubens) that he was on a mission to borrow samples of life from different galaxies and then bring them back to his home planet of Phaelon for analysis. Once finished with them, he would return them to the exact place and time from which they were taken. The Phaelonians found out humans used only 10% of their brain, so David was abducted at random and had his brain filled with star charts to see what would happen (what happened was his brain inexplicably leaked). Max returned him to Earth, but not to his proper time, because the Phaelonians learned that it was too dangerous for humans to travel back in time, due to their fragile bodies. When his ship crashed into the electrical towers as he was leaving Earth (which happened, he later said, because he was looking at daisies), the crash erased all of the star charts and data from his computer, so he needed the star charts from David’s brain to complete his mission and return to Phaelon. David makes Max promise him that he will take him back to his family in exchange for the star charts, and they then escape arriving NASA helicopters.

While hiding in the ocean, Max performs a mind transfer on David to retrieve the star charts from his brain. He apparently extracts other information from David’s brain along with the star charts, which causes his personality and voice to change into something more human-like (this hints at the viewer that he extracted a part of David’s personality from the extra information). David and Max travel the Earth for a bit, NASA tracking their movements the whole way, before making the journey back to Fort Lauderdale. When they arrive outside David’s house, they find NASA personnel have already surrounded the house, waiting for them. After David steps out of the ship and looks at the scene before him, he decides he can’t stay in 1986 because he knows he’ll be treated like a guinea pig for the rest of his life if he did. He tells his family he loves them, and then re-enters the ship, telling Max to return him to 1978. Max is extremely hesitant to do so, because David would be at risk of being vaporized if he did that, but David’s mind is made up. Max and David say their goodbyes to each other as the ship begins to make the time travel trip.

David awakens in the woods behind his house, and he immediately rushes back home, where he finds that he has indeed returned to 1978, after seeing his whole family and everything else the way he remembered it before Max abducted him, although he now had a small alien specimen of Max’s that he had come to see as a pet in his schoolbag. David and his family ride off in their boat to watch the 4th of July fireworks from the harbor, and David notices Max’s ship flying overhead, where he says goodbye to David one last time. 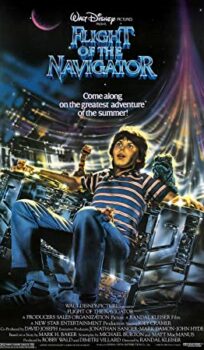