Sky Marshall Carson (Peter Sarsgaard), flight attendant Stephanie (Kate Beahan) and the German Mortuary Director (Christian Berkel) are conspirators in the elaborate scheme to convince Kyle Pratt (Jodie Foster) that her daughter Julia (Marlene Lawson) was never on the plane. Carson actually pushed Kyle’s husband David off of the roof of the hotel. The mortuary director sent a fake message to the plane claiming that Julia was killed in the same fall as her father. The passenger manifest was altered, presumably by Stephanie, to erase Julia’s name and Carson evidently drugged Julia and then carted her down into the avionics bay at the plane’s nose in a food bin while Kyle and Julia were asleep. Kyle realizes that there is a hoax underway when she breathes on the window next to her seat and sees the heart that Julia drew in her own breath when the two of them were watching the casket containing Kyle’s husband, David, being loaded on to the plane. Carson gives a fake message to the Captain (Sean Bean) claiming that Kyle is a hijacker who wants $50 million or she’ll blow up the plane. The mortuary directory hid explosives in the casket lining, since the casket is not x-rayed. Carson rigs the charges in the avionics bay and has everyone convinced that Kyle is the hijacker until the plane lands in Newfoundland and the passengers and crew disembark. Seeing the SWAT teams and the Captain’s reactions, Kyle realizes she has been set-up and turns the tables on Carson, ordering him to both remain on the plane with her and to give his gun to the departing Captain. Carson complies in order to continue to reinforce the hoax. After the plane is empty, Kyle hits Carson with a fire extinguisher, grabs the detonator, beats up Stephanie and uses her knowledge of the plane (she is, as luck would have it, an aircraft propulsion engineer) to find and retrieve Julia from the avionics bay. Julia and Kyle hide in a cargo hold and Julia sets off the explosives to kill Carson, who followed them into the avionics bay. Stephanie is arrested, Julia recovers and all of the passengers go from hating Kyle’s guts to congratulating her. 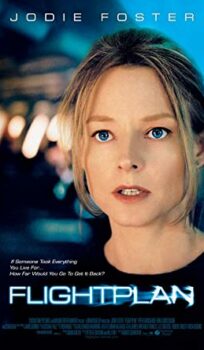