Sandy (Elijah Wood), Porter (Paul Hogan), Kim (Jessica Wesson), Cathy (Chelsea Field), and Marvin (Jason Fuchs) locate the toxic waste on the ocean floor via a video camera Flipper holds in his mouth. Shortly after the discovery, Flipper drops the camera when he spots his main pod, and swims off to rejoin them. Porter heads back to port to tell the sheriff (Isaac Hayes) about the dumped waste, but Sandy gets in the ship’s lifeboat and detaches it so he can find Flipper.

As he calls for him, Dirk Moran (Jonathan Banks) – who dumped the waste and overheard Porter’s ship’s radio transmissions about it – comes along in his boat and destroys the lifeboat. Sandy survives, but then he sees a dorsal fin. He initially thinks its Flipper playing a joke, but he soon realizes that it’s the feared hammerhead shark Scar.

Sandy avoids an attack by Scar, and swims towards Dirk’s boat with Scar in pursuit, crying out for help. Flipper hears him and comes to his rescue and starts nose-butting Scar in the gills. Just as Scar starts fighting back, the rest of Flipper’s pod arrives, and they batter Scar until he retreats. Sandy gets to Dirk’s boat, and Dirk admits to him that he dumped the toxic waste. He then tries to kill Sandy, but Flipper leaps up and knocks him into the sea. Porter, who eventually noticed Sandy’s disappearance, comes soon after and picks up Sandy, and holds Dirk until the sheriff comes and arrests him. Since Flipper found his pod now, Sandy bids him a sad farewell before he swims off with them.

The next day, Sandy goes home on a boat with his mom & sister. As they are departing, Sandy’s attention is drawn to a group of kids heading out on deck to check out something in the water, and he goes and sees it is Flipper and his pod seeing him off. 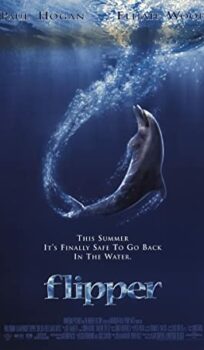