Lucienne (Jennifer Decker) and her family leave for Paris, where it would be safer. She and Rawlings (James Franco) decided that after the war is over they will be together, however she has to leave without giving him any information of where he can find her. During an operation to take down a zeppelin, Cassidy (Martin Henderson) is mortally wounded by the Black Falcon (Gunnar Winbergh), however he still manages to take out the zeppelin by crashing his plane into it. Rawlings in named the new commander of the squadron. The first mission with him in the position is to take out the ammo depot they had previously failed to destroy, this time with help as the United States has just entered the war. Beagle (David Ellison) is allowed to join them after learning how to fly with one hand. Lowry (Tyler Labine) is killed in the battle, but the mission is a success. Afterward, Rawlings flies out solo to try to finally finish the task of taking out the Black Falcon.

He and the Black Falcon engage in battle, but soon the rest of the German squadron joins in. As Rawlings prepares to die, the rest of his squadron, led by Jensen (Philip Winchester), catch up and join in, managing to save Rawlings’ life. The Germans are defeated, but before the battle is over the Black Falcon wounds Rawlings in the shoulder. As he flies beside Rawlings to gloat to his opponent that he is about to kill him, Rawlings manages to flip his plane over and maneuver it the other side of the Black Falcon, where he pulls out his handgun with his good arm and shoots the Black Falcon and kills him. Rawlings and the surviving members of his squadron fly back victoriously. After the war, Rawlings goes to Paris, but he never is able to find Lucienne. He returns to Texas where he opens a successful ranch. Beagle remains in Europe, where he marries an Italian woman and opens a flying circus. Skinner joined the U.S. military before the war ended, but he was unable to join the Air Corps because of his race. Jensen returns to his hometown, where he receives of hero’s welcome. 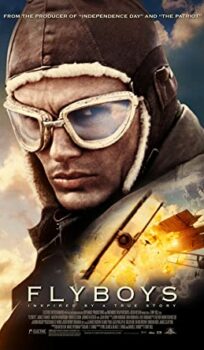