SHORT VERSION
Mallory and Barnsby successfully blow up the dam, and the rush of water destroys the bridge, preventing the German invasion. Earlier, the traitor Nicolai was killed, fulfilling that part of the mission. However, they, along with Miller and Weaver, are on the German side of the river, and they must walk home through German held territory.

LONG VERSION
Shortly after the events of The Guns of Navarone, the heroes of that mission, Major Keith Mallory (Robert Shaw) and Corporal Dusty Miller (Edward Fox) are summoned to the office of Commander Jensen, the man who originally ordered the Navarone mission. There, Miller is promoted to Sergeant, and they are assigned to another mission, this time in Yugoslavia. They are to join Force 10, led by Colonel Mike Barnsby (Harrison Ford), and they are to kill Nicolai, the man who betrayed them at Navarone and is now believed to be part of the Yugoslav partisans. Force 10 is going to Yugoslavia to blow up a bridge that the Nazis are planning to use to invade the southern part of that country.

While flying to Yugoslavia, the plane carrying Mallory, Miller, and Force 10 is shot down. Mallory, Miller, and Barnsby escape, but most of Force 10 is killed. Only Sergeant Weaver (Carl Weathers) survived the crash, and the four of them must now meet up with the partisans. They come across some, but they are actually Chetniks working for the Germans and are quickly captured. Sometime later, they are rescued by partisan spies who had infiltrated the Chetniks and they are led to the real Yugoslav partisans. Once there, Mallory and Miller recognize their leader as Nicolai, who now goes by the name Captain Lescovar, but Lescovar claims the real Nicolai was discovered and killed, and he is pretending to be Nicolai and giving the Germans false info.

Upon seeing their target, Miller tells Barnsby that the bridge is too sturdy to be destroyed, but they could blow up a nearby dam, and the rushing water from the dam would destroy the bridge. After a planned airdrop of explosives is sabotaged by Lescovar, who is actually the real Nicolai, the team decides to get the explosives from the German marshaling yards in a nearby town. The group, which includes Nicolai and some partisans, successfully steal the explosives, but are nearly killed by a group of German soldiers that Nicolai has summoned. One of the partisans sees the soldiers and kills them, at the cost of his own life. Mallory’s suspicions about Lescovar are now confirmed and Barnsby kills him.

Now at the dam, Mallory and Barnsby head inside it while Miller and Weaver set off some diversionary explosives. Mallory and Barnsby detonate the explosives inside the dam, but they appear to fail. Overlooking the dam, Miller tells Weaver that these are “slow-motion” explosives, and the dam will break in a few minutes. Meanwhile, the German army is about to cross the bridge in advance of their planned invasion of the rest of the country. Mallory and Barnsby escape the dam just as the dam begins to break, and the water on the other side of it begins to rush through the cracks. The dam collapses, and the rush of water reaches the bridge and it eventually collapses before the Germans can cross it. Mallory and Barnsby reunite with Miller and Weaver and they begin to celebrate their collective successes, but then Mallory realizes that they are on the German held side of the river, and they cannot cross it to get back to the partisans.

The movie ends with the four men beginning their long walk home through German held territory. 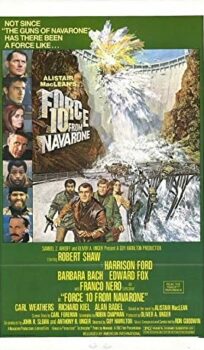