SHORT VERSION:
At the high school graduation party, Dave learns that his hope that he and his friends would go to Ohio State University together has been destroyed; Jay has decided to hold off on any further education for a while so he can travel to some other countries (especially Brazil, where the foreign exchange student [and his new girlfriend] Anita is from), Hashbrown has accepted a full scholarship offer from M.I.T., and Shantz informs him that he has to do the twelfth grade over again because he flunked the special exam Principal Lonnatini made for him (she prepared this exam and based all of his grades on it because she suspected that his friends had been doing his homework for him all year [though it was actually just Hashbrown], and she also made this just for him so he couldn’t cheat on it).

However, on the upside, Dave finally hooks up with Robyn at the party, and she even tells him that she has decided against going to university in Colorado so she can stay with him. They close out the movie dancing together and kissing.

LONG VERSION:
In a scheme to lure Robyn (Vanessa Lengies) away from Dave (Ryan Pinkston) and over to him since he wants to sleep with her, Laurent (Jarrett Sleeper) invites Mia (Jessika Van) – a girl who has an unrequited crush on Dave – to a weekend camping trip with him, Dave, his friends, and the other foreign exchange students, claiming that Dave really wants her to be there, and then he later invites Robyn. When Dave finds out about him asking Robyn to come along and talks to him about it, Laurent claims he is doing it to try to help Dave win her over. During the trip, Laurent sets up Dave and Mia in a situation so Robyn will catch them and make her think that Dave is a player, and before he takes Robyn to them, Laurent privately tells her that Dave says objectifying things about women. He then leads her to where Dave and Mia are located just as Mia has started kissing Dave (just after Dave finds out from Mia that Laurent encouraged her to just go for him), and Robyn walks away hurt. David catches up with her and tries to tell her the truth about what she just saw, but she won’t listen.

On Monday, Principal Lonnatini (Jennifer Coolidge) summons Dave, Shantz (Daniel Booko), Jay (Randy Wayne), and Hashbrown (Miles Thompson) to her office, and she tells Shantz that she knows that his friends have been doing his homework for him all year (though it is actually just Hashbrown), but she can’t prove it. However, she has decided that she will base all his grades on how well he does on one big final exam covering every subject that she has prepared just for him, and given that it is the only version, he won’t be able to cheat on it. At the Spring Fling dance that night, Dave sees Robyn come in and hands the D.J. a C.D. containing a song he wants to have played for her, but then Laurent approaches the D.J. and gives him a different C.D., along with a bag of marijuana as a bribe, so he will play a song he has on that instead. Meanwhile, Jay sees Anita (Tania Raymonde) enter the dance with a sad look on her face, and Mia and Ganja (Arshad Aslam) also begin to hit it off after she becomes impressed with his dancing skills (and they become a couple by the end of the movie). Dave comes up to Robyn and tells her that nothing is going on between him and Mia and says that a song that’s about to play next explains how he feels about her. His song starts, but a few notes in, Laurent gives the D.J. the cue to play his song, which is a rap song filled with expletives and sexually charged lyrics. Robyn believes Dave is objectifying her and gets away from him, and Laurent goes to comfort her after rebuking Dave for “screwing up” again. After Dave gets the D.J. to put his song back on, he notices Laurent embracing Robyn and takes his leave. Laurent tells Robyn that he respects their friendship, but then he tries to get a kiss from her and says that they ought to be friends with benefits, prompting her to slap him and walk over to Anita. After Jay looks in Anita’s direction again, she turns and enters the nearby locker room, so he goes in after her. He finds her sitting on a bench crying, and he deduces that a well-dressed guy she met at an art museum days earlier turned out to be the serpentine man he believed him to be. Jay tells her that he is glad that that man isn’t here, because then she would be with that man and not with him. He then decides to take her home.

The next morning, Laurent goes into Dave’s room and tells him that he will smooth things over with Robyn and explain everything about what happened at the dance. However, after Dave exits the room, Laurent secretly takes his box of stuff about Robyn (full of things a normal person would consider creepy and weird) and leaves it on her front porch for her to find in order to embarrass Dave. When Dave has a fantasy about Robyn a short time later, he goes to find his box so he can masturbate to one of the photos he has of her but sees that it has disappeared. He goes to school and tells Jay and Shantz that his box is missing and asks them to help him find it, and Shantz quickly suspects Laurent of having taken it. The trio find and grab him and submerge his head in a toilet in the men’s washroom for a bit, and after they let him up, he confesses to having taken the box and left it on Robyn’s front porch, (finally) waking up Dave to the fact that Laurent has been sabotaging him all this time.

After berating Laurent for doing this to him, considering that he and his family let him stay in their home while he studied here, Laurent says that he was jealous because Dave seemed to have it all, with a nice family and great friends, and he just couldn’t help himself with trying to get Robyn since she is a virgin. He tells Dave that he thought she liked him, but Dave is all she talks about and is the one she really loves. He apologizes to Dave and promises to spend the rest of his time in America trying to right his wrongs, but Dave replies that he has done enough and he will take care of this his way for once. He thus goes to one of Robyn’s science classes where she and others are dissecting frogs and he tries to pour out his feelings to her, but her squeamish science partner pukes on her. She tells Dave that, whenever he is around, something bad always happens, and then she exits the class. Dave follows her and apparently sees her going into a spare room, so he bares his heart to her through the door and even says he loves her, but the vice-principal turns out to be behind the door. That night, Robyn throws away Dave’s box, but she soon changes her mind and takes it out of the trash.

A few days later, Anita and Jay officially become a couple, and Shantz tells his friends that he passed Lonnatini’s exam. Dave, his friends, and their other classmates have a party that night to celebrate the end of their high school years, but Robyn is not keen on going. Her friend Jez (Ashley Edner) tries to convince her to go, saying that Dave loves her and she wishes she had a guy like him, but Robyn is initially not swayed. However, after looking through Dave’s box, she changes her mind. At the party, Dave talks to Jay, Shantz, and Hashbrown and says that he is looking forward to going to Ohio State University with them like they planned, but he finds out that he will be going there alone; Jay has decided to put any further education on hold for a while so he can travel to some other countries (like Brazil, where Anita is from), Hashbrown has accepted a full scholarship offer from M.I.T., and Shantz reveals that he actually flunked his exam and will be doing the twelfth grade over again, having lied about passing it because he didn’t want to ruin the festive mood. Upset over having apparently lost Robyn and now this plan having fallen apart, Dave leaves them to go sulk in private.

As he is doing so, Robyn appears before him. She thanks Dave for the contents of the box, saying that it is the sweetest thing anyone has ever done for her, and Dave confesses that he has been in love with her since the fifth grade. She then says that she wants to stay with him and not attend university in Colorado, wanting to spend the next four years making up for the past seven years that they could’ve become an item and didn’t. Dave then takes her outside and has the live band play the song he wanted to have played at the dance, and he dances with Robyn and kisses her. 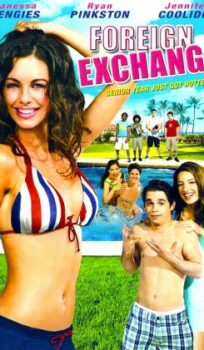