The Angel (James Mason) convinces Susan (Lucille Ball) to go on a camping trip with Lorenzo (Desi Arnaz), on which he will be testing his chemical to kill mosquitoes.

After Susan inadvertently causes trouble the couple have a large argument and seem worse off then ever. Lorenzo’s bosses arrive to see how the experiment works, and the mosquitoes don’t die, causing everyone to believe it was a failure. Susan decides then and there, to change her life, realizes how much her husband means to her and goes and comforts Lorenzo and tell him they’ll work through it together. The bosses then try the experiment again on a whim, and this time it works, (the Angel had changed some of the chemicals around for the early test in an attempt to reconcile Susan and Lorenzo).

Susan and Lorenzo kiss, and her guardian angel disappears into Lorenzo, implying he is now, once again, her ideal. 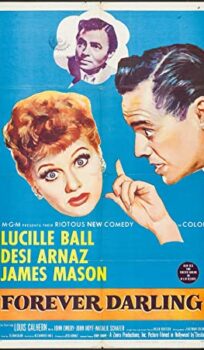