When Sarah Marshall, a successful television actress dumps her composer boyfriend Peter Bretter (Jason Segel) he is absolutely crushed by their breakdown, leading him to alternate between unsatisfying one stands and bouts of crying. On advice of his step brother Brian (Bill Hader) Peter takes an impulse trip to Hawaii…only to be in the same hotel as Sarah and her new rocker boyfriend, Aldous Snow (Russell Brand).

However, a hotel employee Rachel Jansen (Mila Kunis) pities him and offers him a great room next to nothing since no one can afford it anyway but the super rich. As he continues to get over Sarah, he begins to spend more time with Rachel, which is starting to make Sarah jealous. In addition, he finally gets Sarah to admit why she broke up with him; despite everything being good, Sarah could not shake Peter out of his apathy. She tried everything to do so and he was just too clueless to notice.

Later, after a drunken dinner between Peter, Rachel, Sarah, and Aldous, Peter and Rachel go back to his room and have sex (he lost the other one halfway through the movie). Sarah becomes irked by their moaning, and forces Aldous to have sex with her so she can one up Peter. This fails, and Sarah tells him that she hates his music and Aldous confesses that his “free love” philosophy isn’t just a theory as he slept with the maid. After sex, Peter tells Rachel that even though he is leaving soon, he is glad to have met her and she agrees.

The next day, Aldous leaves Sarah to go back to Europe and Peter goes to comfort her. They wind up kissing and almost have sex but Peter cannot get an erection. He takes this a epiphany, and leaves Sarah for good, telling her that she broke his heart in a million pieces.

Peter goes to Rachel to be honest, but she gets mad and tells him to go and not call. Before he leaves, he retrieves the embarrassing photo of her and returns it to her, getting beat up in the process. He goes back to Los Angles and finally gets the inspiration to finish his Dracula rock opera Taste of Blood.

We see that at a successful performance that Rachel has come to see Peter. They talk and she tells him that she has come to LA to research schools so she can go back to college. She goes back to his dressing room later and they reconcile and kiss (him being completely naked).

Just as the credit begin to roll we see Sarah Marshall in an NBC promo for a new show Animal Instincts (as her CSI knock-off was canceled during the film) as an animal psychic with Jason Bateman cameoing as her partner. 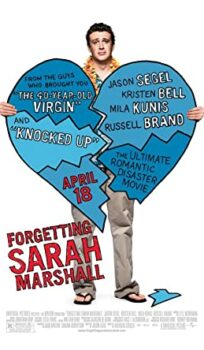