“Scotty” (Bruce Solomon), the man who died next to Gloria (Goldie Hawn) in the movie theater, was a police detective who had uncovered a plot to murder the Pope during a performance of Gilbert & Sullivan’s comic operetta The Mikado. “The Dwarf” he warned her about was Rupert Stiltskin, an assassin who used “the Dwarf” as his alias.

The Cardinal of San Francisco (Eugene Roche) had been murdered earlier and replaced by his identical twin brother. The Cardinal’s housekeeper Gerda (Rachel Roberts) was really Delia Darrow, a miliotant atheist.

Tony and Gloria hijack a limousine occupied by two elderly Japanese tourists, and drive frantically to the Opera House, to stop the assassination. They find would-be sniper Whitey Jackson there. Whitey shoots a policeman in the upper deack of the theater, and Tony shoots Whitey. The bodies of the two men fall, and are hanging overhead as the performance of The MIkado ends. The audience is confused by the two dead bodies, but the Pope applauds enthusiastically, and everyone else joins him in clapping. 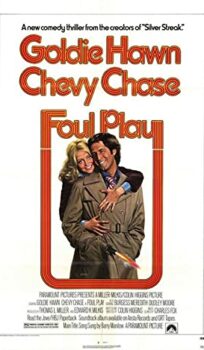