Omar (Riz Ahmed) and Waj (Kayvan Novak) escape Pakistan after accidently blowing up the Arab training camp with a shoulder fired missile. When they arrive back in London Omar lies about becoming trained suicide bombers. They, along with Barry (Nigel Lindsey), Fessel (Adeel Akhtar) and Mahmood (Mohammad Aqil), begin making martyr videos and putting together the explosives.

While moving the home made explosives to a new location, simpleton Mahmood, at the urging of his friends, runs across a field, trips over a sheep and blows up. The men collect his body parts, but can’t find his head, which later falls out of a tree and hits a dogwalker.

Unbalanced Barry has a plan to blow up a mosque and make it look like the Israelis did it, is eventually quashed overruled. Omar instead has the idea to dress in mascot costumes and join the London marathon, blowing themselves up in the large crowds.

As the four men are getting into costume and strapping on the explosives, Waj announces that he doesn’t think this is right, but Omar confuses him into going ahead with the plot anyway. A policeman walks up, asks them a few questions and then gives them directions to the race. As the officer walks away Fessel panics and chases him, yelling that he doesn’t want to be a martyr. Using his cell phone, Barry detonates Fessel’s explosives.

The rest of the group scatters, but the police are everywhere, cutting them off from the race. Waj ends up taking hostages in a kabab shop. Omar, dressed as a “honey monster” makes it into the race, but the police snipers are told to stop a bear. A man running next to him in a Wookie costume is shot instead, after which the snipers argue about what a bear and a wookie look like.

Omar slips out of the race and stops at a coffee shop to call Waj. He tells his friend that what they are doing is wrong and that he should let all but one hostage go. Barry shows up, grabs the cellphone and pulls the SIM card. He swallows it, but starts choking. A passerby gives him the Heimlich and blows them both up.

Omar, racing to the kabab shop, literally runs into his boss. Omar claims he works for MI5 and borrows his boss’s cellphone to call Waj back. While Waj is talking to Omar the shop is invaded by the police and they shoot the hostage, thinking he’s the terrorist. Waj looks around, says “I’m confused” and the shop blows up.

Omar, watching from a distance, sadly tells his boss to let everyone know that he was smiling, walks into a nearby drug store. A few seconds later, that too, explodes.

During the end credits a new reports shows spy plane footage of Omar shooting the missile that destroys the camp. The announcer then states there is official confirmation that Osama Bin Laden was killed in the explosion. 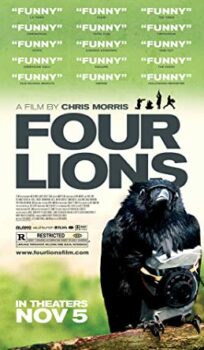