POOPER: (Sent by Fluffy Evil Angel Wire)
Gareth (Simon Callow) dies at Carrie’s (Andie MacDowell) wedding, and his partner Matthew (John Hannah) delivers a touching speech at his funeral.  After talking with Tom (James Fleet), Charles (Hugh Grant) decides that true love just isn’t meant to be, and so he decides to marry Henrietta (Anna Chancellor).  Carrie shows up at the wedding and tells Charles that she and her husband have split up, which shakes his resolve.  On his behalf, his brother interrupts the wedding so that it will not go forward.  Charles and Carrie live happily ever after–NOT married, although almost everyone else does get married.

LONG ENDING:
The film opens at a wedding where Best Man Charles (Hugh Grant) arrives late and without the rings for the married couple. The ceremony is completed anyways and Charles redeems himself with a memorable Best Man speech. As the wedding winds down, bridesmaid Lydia hooks up with groomsman Bernard. Charles’ friends – Fiona (Kristin Scott Thomas), Fiona’s brother Tom (James Fleet), Charles’ deaf brother David (David Bower), gay couple Gareth (Simon Callow) and Matthew (John Hannah), and Charles’ roommate Scarlett (Charlotte Coleman) – invite him to an afterparty. Charles instead takes up the invite of an alluring American woman named Carrie (Andie MacDowell) back to her hotel. The two have passionate sex before Carrie leaves a lovestruck Charles in the morning.

Later, Lydia and Bernard get married, and all the same guests go to this wedding. They are married by a nervous young priest – Father Gerald (Rowan Atkinson). A wedding guest approaches David from the prior wedding who has learned sign language in order to meet him. Charles is excited to see Carrie again but crushed to learn that she’s now engaged. Things get even worse for Charles as he is trapped in a room while Lydia and Bernard have sex and are later confronted by a couple of exes, including his most recent ex-girlfriend Henrietta (Anna Chancellor). We also learn that Scarlett can’t get men to commit to a relationship with her and that Fiona doesn’t date because she’s in love with a man who doesn’t even know about her feelings. As the wedding winds down, Carrie invites Charles to her hotel so they can catch up. The two end up having sex again, and this time Charles leaves in the morning.

Several months go by and Charles and his friends receive an invite to Carrie’s wedding. When Charles goes to buy a gift, he runs into Carrie, and they spend a fun day together. They later meet with David, who sees that Charles is crazy about Carrie. David encourages Charles to tell Carrie his feelings. Before they part, Charles declares his love in a bungling speech. Although Carrie doesn’t reciprocate, she is clearly flattered.

The friends go to Carrie’s wedding and she marries her fiancee. At the reception, Gareth encourages the group to find someone to love so he can finally attend a wedding for people he cares about. Scarlett flirts with a charming American man named Chester (who lies and says his name is Rhett (as in Butler) to match Scarlett (as in O’Hara)). Tom tries to pick up a woman but is rebuffed. Fiona drunkenly reveals to Charles that he is the man she’s secretly in love with. He is considerate but doesn’t return her romantic affection. During the speeches at the reception, Gareth suffers a sudden heart attack and dies.

They all attend Gareth’s funeral where Matthew gives a very moving eulogy. The group realizes that while Gareth and Matthew weren’t officially married, they were in a relationship very similar to one. Charles and Tom take a walk together after the funeral and both share their feelings of loneliness and fear of dying alone instead of with a partner (like Gareth had Matthew). They agree that love in a flawed relationship is better than being alone.

10 months later, Charles arrives at a church for his own wedding. He’s proposed to Henrietta, clearly settling for a steady spouse rather than a passionate love. As the guests arrive, Tom meets a distant cousin and the pair are taken with each other. Fiona says that now that she knows she and Charles are just friends, she can move forward and date others in earnest. Carrie shows up and surprises Charles by telling him that she is recently divorced. After hearing this news, Charles disappears. Matthew and David find him and Charles questions whether to go through with the wedding to Henrietta. Although Charles ultimately decides to go down the aisle, David objects before they are married. Being touched by David’s objection and realizing that he simply doesn’t love Henrietta, Charles doesn’t go forward with the marriage. After the ceremony ends, Carrie visits Charles at his home. The two finally admit their feelings for each other and decide to date.

During the closing credits, we learn that: 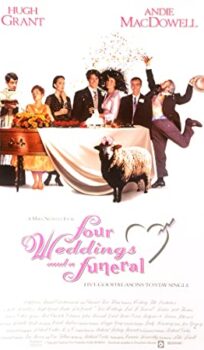