Short pooper:
Both Joanne (Lily Rabe) and Peri (Lucy Capri) died at the construction pit incident. Everything that we saw, from that moment on, regarding Ray (Sam Worthington) getting help for Peri, and the alleged conspiracy and its aftermath, was all in his mind. In the end, what he “rescues” from that basement wing, and drives away with, turns out to be a gravely injured young patient from a head-on collision referred to, earlier in the film.

Longer version:
Everything starts pointing to the fact that Ray never came to the hospital with Joanne, looking for help for Piri’s broken arm; instead, many staff members -including Dr. Berthram (Stephen Tobolowsky)- insist that he just came for a head injury on himself, kept talking about “Abby”, and that there seems to be no evidence of his wife and child having been there at all. Meanwhile, he is getting more and more erratic, and further convinced they all must have done something with his family. When the Police, and Dr. Jacobs (Adjoa Andoh) -the hospital’s psychiatrist- get involved, they all agree to go back to the construction pit where Piri was supposed to have injured herself, earlier.

Once there, a massive bloodstain is uncovered under the falling snow and Ray becomes a murder suspect; at the same time, Dr. Jacobs tries to convince him that something bad must have happened to his wife and child. At this point, we also discover that Abby -whom he did reveal as his deceased first wife- died, a few years prior, along with the couple’s unborn child, after a head-on collision, caused by a drunken and careless Ray. When Officer Childes (Lauren Cochrane) moves to arrest him, he reacts, pulls her gun and, using Jacobs as a shield, manages to lock everyone at the site in the gas station, after which he rushes back to the hospital.

He pushes his way around, to get to the elevator that would lead him to the basement, where he fears his family is being secretly harvested for organs. Yet, he finds himself fighting against Jeff (Chad Bruce), the vicious security guard from before, and strangling him to death. Once in the basement, he finds the operating room, where Peri is about to be harvested herself and Joanne lies unconscious to the side; with Dr. Lucado (Chris Sigurdson) in charge of the procedure. Despite Lucado warning him that “he is mistaken and isn’t seeing things clearly”, Ray engages in another fight with everyone present, to the point of causing an oxygen-related explosion, before being able to haul Joanne and Peri off in a wheelchair; on his way out, he shoots Dr. Volk (Erik Athavale), another doctor who had seen Peri shortly after their arrival.

As he finally drives home with his family in tow, seated in the back, and they all reassure each other, the camera pans further in, through the rearview, and we see that a badly injured young man is actually lying on the back seat.

WHICH LEADS TO THE BIG REVELATION…

Peri cracked her head upon her fall, dying instantly; and, when we saw Joanne horrified, confronting Ray, at that point, he snapped and harshly pushed her off, which caused her to fall and land, head first, on a protruding rebar, thus dying, too. Upon realizing it, he put both their corpses in the trunk, where they had been, covered by a blanket, all along. While this gets shown, we hear again, in voiceover, when Dr. Jacobs was trying to convince him that, sometimes, the mind, upon a traumatic event, creates a false reality as a shelter for the horrors we cannot cope with. Therefore, everything that happened past the accident showing Ray’s family alive was his denial to accept reality. And whom he actually extracted from the hospital was a young boy who had been severely wounded in an early head-on collision where some other people died (hence, the organ harvesting taking place).

The movie ends as Ray keeps on driving, singing Sing a Rainbow to “comfort his family” with an expression that goes from a slight proud smile to a cold, creepy blank-like stare. 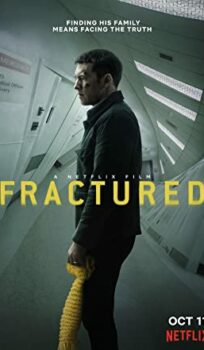