At her new job in a rundown children’s hospital in England, a new night nurse, Amy (Calista Flockhart) replaces a nurse everyone thinks has gone crazy. The children suffer from bones that break for no reason and claim that “a mechanical girl” named Charlotte lives on the hospitals second floor which has been closed off for 40 years. They think Charlotte suffered from a fragile bone disease that caused her bones to fracture at the slightest touch, the girl had body braces all over her to help her bones heal, the braces had screws that attached to her broken bones.

Amy meets one of the only 8 patients left, Maggie who is dying and an orphan and instantly becomes very attached to her. As scary things happen in the hospital Amy tries to convinced people that the place is haunted by the girl.

Amy and the night doctor finally discover that the little girl they think is Charlotte is actually named Mandy and Charlotte was her nurse. She loved Mandy so much that when the girl had started to improved enough to leave the hospital the nurse continued to break her bones to keep her there. When the nurse was caught and fired she went insane and smothered Mandy, removed her braces, screwed them into her own bones and threw herself down the elevator shaft. It was the nurse who had haunted and tortured the children because the hospital was being shut down and the children were being taken away.

The doctor and Amy try to evacuate the remaining children from the hospital to protect them from the ghost, but removing the children enrages her further and she begins breaking the bones of the children as they try to leave.

Suddenly the ghost stops hurting the kids and they are taken away, Amy realized Maggie is missing and runs to the hospitals second floor to get her. While trying to save the girl, the ghost attacks, Maggie is killed and Amy nearly dies, but she is saved by Maggies ghost who kisses her on the lips (a love kiss to save a princess like in the sleeping beauty cartoon she loved).

In the end we see that Amy is fine, and Maggies ghost sits on the bed next to her because “ghosts stay with what they loved most”. 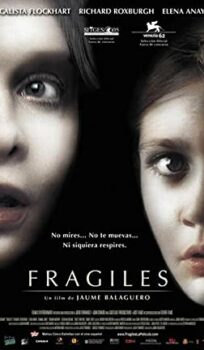