The man who introduced himself as Fenton Meiks (Matthew McConaughey) is actually Adam Meiks, who is carrying on the mission of “destroying demons.” Fenton killed their father (Bill Paxton), and was the “God’s Hand” killer, but Adam couldn’t touch him until his name showed up on Adam’s list. And the reason that Adam is making this backwards confession to Agent Doyle (Powers Boothe)? Doyle’s is the next name on the list! As Adam touches Doyle, we see Doyle’s memory of slashing his mother to bits, and realize that Adam really can see demons, and actually is carrying out the work of God. Adam’s appearance is erased from Agent Hull’s (Derk Cheetwood’s) memory and the Dallas FBI video surveillance system, so all of the clues in Doyle’s disappearance lead to Fenton. Agent Hull, following up on the evidence trail, goes to Thurmond, TX, where he finds proof of Fenton’s guilt (and assumes he killed Doyle as well), and then consults with the Sheriff in Meat–Adam Meiks.

Who? Where?
“God’s Hand” murder victims One found at location of killing, all others displayed as trophies in Fenton’s basement
Demons (including Fenton Mieks and Agent Doyle) Cut up and buried in the Thurmond Rose Garden
Dad and Sheriff Smalls Buried whole in the Thurmond Rose Garden
Agent Hull Oblivious to the fact that he’s met Adam twice
Adam Mieks Still destroying demons, going undetected with the help of God 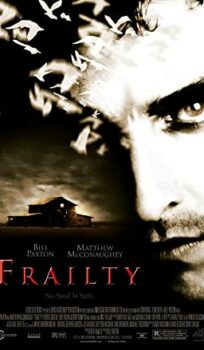