After Edgar (voice of Atticus Shaffer) let’s slip that Victor (voice of Charlie Tahan) has reanimated his beloved dog, Sparky, the other kids that are competing at the Science Fair resurrect their own creations.

Chaos ensues as the monsters invade the carnival grounds on Dutch Day where the whole town of New Holland has gathered. The water monkey gremlins are fed popcorn, and since they are fresh water monkeys, they explode. Colossus is stepped on by the turtle (in a homage to Bambi meets Godzilla). When the rat is inadvertently electrocuted and dies, that gives Victor the idea to run an electric current through a puddle of spilled beer that the turtle is standing in. This kills the turtle.

When Elsa (voice of Winona Rider) and Persephone, Sparky’s poodle “bride”, are snatched by Mr. Whiskers and flown to a windmill on the hill overlooking the town, Victor and Sparky attempt to rescue them. The town converges on the windmill. The windmill is set on fire. Victor rescues Elsa, but Mr. Whiskers grabs Sparky and draws him into the collapsing windmill.

It appears that Sparky is dead, but the townspeople hook up their car batteries to Sparky and reanimate him once again. Victor, Elsa, Sparky and Persephone are reunited, and everyone lives happily ever after. 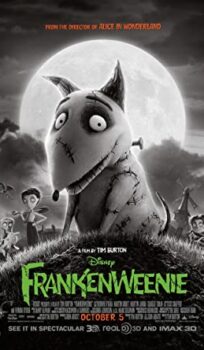