SHORT VERSION:
Thanks to Stefano’s machinations, Duffy fails to contact Adriana at all during the frat party and misses his flight to San Francisco, and by the time he gets to the church, Adriana – having come to believe that Duffy cheated on her at the party and has stood her up – has wed Stefano on the advice of her father and sister (despite the fact that the latter is already dating Stefano).

Some days later, Duffy gets back together with his ex-girlfriend Kelly, though he feels half-hearted about this at best. They go to a hotel restaurant he used to frequent with Adriana to grab a bite to eat, and there they find Adriana dining there with Stefano and her family. Duffy tries to explain to Adriana that Stefano is to blame for him being late to their wedding, but Adriana doesn’t believe him, having gotten what she believes is the whole story from Stefano and is convinced that he was unfaithful to her. He tells Adriana that he loves her, prompting Kelly to dump him and storm off, but Adriana says that he ought to just go after Kelly and that they are through. After watching him exit the hotel and sitting outside the entrance looking forlorn, Adriana decides to go talk to him in private so she can affirm that their relationship is over, then help him get back together with Kelly. Duffy again tries to tell her his side of the story, but she still refuses to listen, so he gives up on trying to get through to her and walks away.

Adriana heads back into the hotel, but when she enters her room, she finds Stefano having sex with Michela, and she realizes just how stupid she was for having gone through with marrying the guy. She leaves the hotel to go look for Duffy, and she finds him as he is walking along a beach. She first dresses him down for having gone to that party before asking if he still loves her and if he still wants to marry her, and he says “yes” to both things before they kiss passionately.

Adriana gets her marriage to Stefano annulled and weds Duffy. The credits show that they are now living a nice life in Bulgaria, where Duffy is working at one of Adriana’s father’s wineries, and she is now pregnant with their first child.

LONG VERSION:
Duffy (Randy Wayne) spots Stefano (Robert Parks-Valletta) at the frat party and surmises that Adriana’s (Caroline D’Amore) father Bergamotti (Carl Bressler) must have sent him here to spy on him. Shortly afterwards, Mac (Jareb Dauplaise) and Chad (Dan Levy) bring him downstairs to a sex dungeon for some S&M fun, and Duffy sees that the dominatrix is Jennifer (Alicia Ziegler), a mentally unbalanced woman he had a fling with in the past. He tells her that they can’t do anything wild and crazy because he is getting married to Adriana tomorrow and also tells her about Stefano and the likely reason why he is here, and she strangely tells him that it was wrong of him to skip the rehearsal dinner to attend this party. When he asks her to do him a favor, she deduces that he wants her to lure Stefano here so she can tie him up and prevent him from leaving. When Chad then comes back in wondering why Duffy hasn’t gotten busy with Jennifer yet, Duffy asks him to bring Stefano in here.

Once Chad leaves, Jennifer gets Duffy undressed and tied up, claiming that Stefano will want the exact same treatment when he comes in and sees him like this. Chad and Mac bring Stefano in and take their leave, but Stefano and Jennifer soon reveal that they are in cahoots with each other; Stefano was paid by Bergamotti to set Duffy up and make him miss the wedding because he wasn’t too thrilled about having Duffy for a son-in-law, especially since he decided to forego the rehearsal dinner, and Jennifer partnered with Stefano because she had been looking for a way to get back at Duffy for breaking her heart (though how she and Stefano even met is never explained). They subsequently blindfold Duffy, stuff a ball gag in his mouth, and then abandon him. As the night goes on, Adriana calls Duffy multiple times to check on him, since he failed to call her like he promised her he would, but he is obviously unable to answer his phone.

After the party ends at around 4:00 a.m., Mac wakes up from a drinking spell and notices that his and Duffy’s only flight to San Francisco has already left, so he heads down into the sex dungeon to collect Duffy. After untying him, Duffy explains how he ended up that way, and after Mac mentions that they missed their flight, Duffy tells him that they are just going to have to drive all the way to the wedding. Unfortunately, in his haste to depart, Duffy forgets to bring his phone with him, so he never answers any further calls that Adriana makes. Come time for the wedding to begin, Adriana distresses over how Duffy still isn’t answering his phone, and she soon finds herself wrestling with the decision of either continuing to wait for him, calling the whole wedding off, or going through with a suggestion from Bergamotti and her sister Michela (Katerina Mikailenko) to just marry Stefano instead, since they believe Duffy has stood her up and the majority of the guests will be more accepting of this pairing, plus Bergamotti believes that Stefano is a good man and the union would be good for his wine company (plus Michela – who is already dating Stefano – believes that he will never marry her). Duffy and Mac arrive at the church soon after, but just as Duffy starts to open the doors, they fly open and knock him on his butt, and Adriana walks out with Stefano, having just tied the knot with him. Duffy can only watch with stunned silence as Stefano takes Adriana into their limousine and drives away, and afterwards, he gets chewed out by his parents for ruining this whole ceremony before Michela then curses him for screwing up her life by losing Stefano to her sister.

The next scene shows Duffy hanging out with his ex-girlfriend Kelly (Lauren Mayhew) at a beach, having restarted his relationship with her, but it is clear that he is feeling half-hearted about it at best. Duffy decides to take her to a hotel restaurant he frequented with Adriana to grab a bite to eat, but they find Adriana, Michela, Bergamotti, and Stefano already dining there. Duffy approaches them and tries to explain to Adriana that Stefano locked him up at the frat house and made him miss his plane, but Adriana doesn’t believe him, having gotten what she believes is the whole story from Stefano and is completely convinced that Duffy was unfaithful to her. Duffy tells Adriana that he loves her, prompting Kelly to dump him and storm off, and Adriana replies that he should just go after Kelly, then says that she is not in love with him anymore. After she watches him walk out of the hotel and then sit near the entrance looking forlorn, she decides to go talk to him and try to help him get back together with Kelly as well as affirm her decision to end things between them for good, and she tells Stefano as much. Before Adriana leaves, Michela asks her how long all of this will take, and she says at least a couple of hours, after which Michela gives Stefano a lustful look. After Adriana comes up to Duffy, he once again tries to tell his side of the story and repeats that he loves her, but she still doesn’t believe him and tells him that their relationship is over. Heartbroken and upset, he gives up on trying to get through to her and angrily tells her to just go back to Stefano and her family, then walks away.

Adriana heads back into the hotel, but when she goes into her room, she finds Stefano having sex with Michela, and she realizes just how much of an idiot she was for agreeing to go through with marrying the guy. She runs out of the hotel and starts to look for Duffy, and she eventually finds him taking a lonely walk along the beach. She rushes right up to him and first dresses him down for having gone to that frat party, but then asks him if he still loves her and if he still wants to marry her, and he says “yes” to both of these things. She assures him that she will be getting her marriage to Stefano annulled, and then they kiss each other passionately.

During the credits, pictures reveal that Duffy and Adriana got hitched and they are now living a nice life in Bulgaria, where Duffy is working at one of Bergamotti’s wineries, and she is now pregnant with their first child. 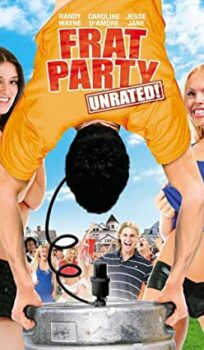