Pooper:
The town overcomes their differences to defeat the aliens. Dag and Petra end up dating. Ned and his family end up being closer than ever.

Long Ending:
The movie takes place in a small town populated by humans, vampires and zombies. Though they co-exist (with zombies essentially forced into menial work), there is simmering tension between these groups. The town’s big claim to fame is that it produces a sandwich called the “Riblet.” The creator of the Riblet, Rick Wilson (Denis Leary), is selfish and rude.

Dag (Nicholas Braun) is a former geek who is now a star athlete. He has issues coming through in the clutch and is also hopelessly in love with the town’s drug dealer Lorelei (Vanessa Hudgens). Dag continues to strike out with Lorelei despite pep talks from his parents (played by Joan Cusack and Bob Odenkirk) who state that his problem is he hasn’t hit manhood and gone through his change yet but when he does, the “change” will be big. Petra (Mackenzie Davis) is seduced by one of the hottest vampires in school. During a party, the vampire convinces Petra to let him turn her into a vampire (she thought he wanted to have sex with her, not drink her blood). Ned (Josh Fadem) is a geek who is constantly abrasive to those around him and determined to get out of the town on an an academic scholarship. His dreams are dashed when his vampire teacher Mr. Keller (Keegan-Michael Key) fails him just to be a jerk. His home life is also bad as his dad idolizes Ned’s athlete-brother (who spends most of his time insulting Ned). After observing that zombies don’t care about anything but eating brains, he convinces a zombie (cameo by Mae Whitman) to bite him so that he turns into one of the walking dead and won’t have to endure his crappy life any longer.

One night, aliens appear over the town. Each faction of the town blames the other of working with the aliens to try and eliminate the other factions and a riot breaks out. During the riot, Petra learns the vampire that turned her is only interested in sleeping with Lorelei and lied to Petra about his affections towards her just to drink her blood (claiming she has delicious-looking veins). Dag almost gets to have sex with Lorelei (she doesn’t want Dag to die a virgin), but they are interrupted by the riot. Dag and Lorelei try to flee town but are caught right between a group of fighting zombies and vampires. Petra attacks Lorelei in a fit of jealous rage and though Dag has an opportunity to save Lorelei, he freezes up and Petra drinks her blood. Eventually, only Dag, Lorelei and Ned survive the fight. They are about to fight each other when the aliens start attacking people (seemingly disintegrating them with lasers). So the three hide in the bunker of Dag’s piano teacher (cameo by Patton Oswalt). Ned and Lorelei then immediately attack and eat/drink Dag’s piano teacher.

The threesome are initially antagonistic to each other. Dag was friends with Ned, but once Dag grew taller and became an athlete, he broke off their friendship. Dag is also responsible for starting a rumor that led to Petra being called a slut. Dag apologizes for his past and the three soon overcome their differences. Petra even makes out with Dag after she apologizes for killing Lorelei (though she remarks that if Dag really loved Lorelei, he would not have hesitated to save her in the clutch). They eventually learn that the aliens are not killing the townsfolk, rather, they are transporting them to another undetermined location. Due to lack of brains, Ned goes through withdrawal, which allows him to regain his considerable intellect. He deduces that The aliens have come only because they want a chemical that is used to produce the Riblets. The trio approach Rick and ask him to give the Riblets to the aliens, but he rebuffs them and kicks them out of his factory.

The three decide that they can force Rick’s hand with the support of the town and allow the aliens to capture them. They are transported to a local department store where the aliens are keeping the three groups separated by a force field. While there, Ned discovers his brother and dad have also been bitten and are now zombies. The family shares a tearful reunion wherein Ned’s brother and dad express their love for Ned. Petra stands up for herself and embarrasses the vampire who turned her. She also learns that Lorelei is not dead but was turned into a vampire by Petra (and is therefore hotter than ever). Dag is relieved to learn his parents are still alive. Dag, Ned and Petra determine that if the townspeople all unite and attack the force field simultaneously, the field will be destroyed. Dag gives an inspirational speech that unites the town and they break free and head to Rick’s factory. It is revealed that Rick is only so mean because he is bitter that the town never accepted him. Dag states that jerks like Rick and himself deserve to be embraced by the town as nobody is perfect. Rick agrees to give the aliens the chemical.

The aliens take the chemical and use it to fuse together into one giant, beautiful being (voiced by Werner Herzog). The alien chastises the town for simply not asking them what they wanted and notes that if it weren’t for the aliens separating them with a force field, the town would have killed each other. Petra and Rick insult the alien, stating that the alien has no right to condemn their town. This causes a fight to breakout between the alien and the town (during which Mr. Keller is crushed to death during an act of heroism). While distracted, the mean vampire abducts Petra and plans to kill her for embarrassing him. Dag sees this and runs to defend Petra without hesitation. This selfless act initiates his “change,” letting Dag turn into a werewolf with the power to kill the vampire. The alien is defeated and flees to his ship. The alien tries to destroy the town from his ship, but Ned (with an assist from Dag and Petra) manages to save the day and destroy the alien ship.

At the end, we see the town is living in greater harmony. Rick now sells a vegetarian Riblet. Ned continues bonding with his family and appears to be dating the zombie that bit him. Though Lorelei seems genuinely interested in Dag, he is happily dating Petra. 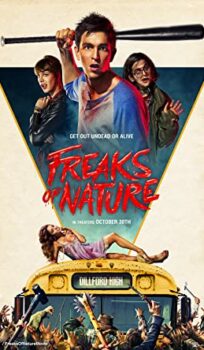