Teenager Millie Kessler (Kathryn Newton) sees herself as ordinary and has a strained relationship with her mother Paula and older sister Charlene after the death of her father a year earlier. Millie is attacked at school by the notorious serial killer, The Blissfield Butcher (Vince Vaughn), who stabs her with an ancient dagger called La Dola that causes them to switch bodies.

As Millie, the Butcher is able to commit murders without arousing suspicion. As the Butcher, Millie has to convince her best friends Josh and Nyla to help her turn back to normal before midnight, or else the switch will be irreversible. They also convince Millie’s crush Booker as to who she is, and after they capture Butcher-Millie, they attempt to get the dagger from the police station. They succeed, but Butcher escapes and goes to the old town mill where the homecoming dance is taking place. The friends manage to catch the Butcher and help Millie return to her normal body before the police shoot the Butcher. She and Booker also share their first kiss.

The Butcher survives and goes to attack the Kessler women in their home. They manage to overpower him eventually before Millie impales him with a broken table leg, ending his murder spree once and for all. 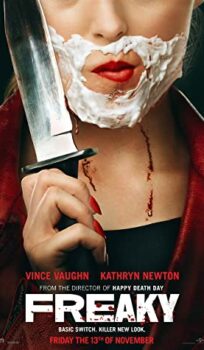