An ordinary arms deal is supposed to go down with Justine (Brie Larson) brokering the deal between the dealers and buyers. The dealer, Vernon (Sharlto Copley), brings the wrong weapons to Chris (Cillian Murphy), one of the buyers. Things go south when one of Chris’s guys, Stevo (Sam Riley), gets into a fight with one of Vernon’s guys, Harry (Jack Reynor), after they had a violent encounter the previous night. Both groups end up in a prolonged shootout.

Two additional snipers show up after being sent by Vernon’s #2 man Martin in an attempt to double-cross Vernon and take the money. Just about everyone involved gets killed. Chris and Vernon’s rep Ord nearly get away with the money until Justine shoots both of them dead. Justine almost gets away until the cops arrive at the warehouse. 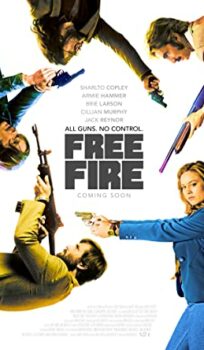